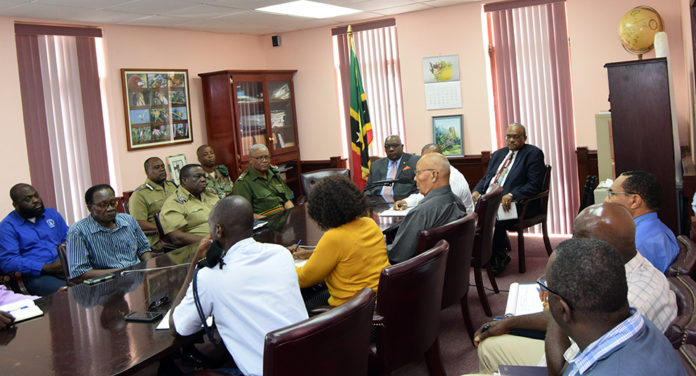 Religious community commits to assisting in fight against crime, violence

BASSETERRE, St. Kitts – Members of the different religious groups across St. Kitts and Nevis have committed themselves to playing stronger roles in helping to reduce the incidences of crime and violence, particularly among young people in the federation.

This renewed commitment by leaders within the religious community was made when they met with the prime minister and minister of national security, the Honourable Dr. Timothy Harris; National Security Adviser Maj. Gen. Stewart Saunders; Commander of the St. Kitts and Nevis Defence Force Lt. Col. Patrick Wallace; Deputy Commissioner of Police Hilroy Brandy; Commanding Officer of the Coast Guard Unit Maj. Anthony Comrie; and other high ranking security officials.

Harris said the meeting, held at government headquarters Aug. 17, was organized essentially to introduce and acquaint the religious leaders with the new national security adviser and to advise them of his roles and responsibilities in that position.

“Since he has been here, [Saunders] has met with the high command of the defence force, the high command at the police, our prisons, etc.; he has engaged some other [people] in the national security frame and … earlier this week, we had a very good meeting with the economic actors, the Chamber of Industry and Commerce and the Hotel and Tourism Association,” Harris said. “…His first couple of weeks, among other things, is doing that. He has come to hear from you; what are your views, your concerns, to see how he can help us [to] help the security forces think on these things and incorporate what he may consider … the … concerns of the people into our planning.”

Saunders reminded the members of the clergy of the important role of the church in the overall development of the country.

“You are a vital aspect of what I look at from my perspective,” he said. “All the programmes that have been enunciated today are programmes that are critical to fighting crime, and unless we can put it forward or get it going in a unified perspective, we are going to be fighting a lost cause.”

Acting president of the St. Kitts Evangelical Association, the Rev. Hilton Joseph, echoed the sentiments shared during the meeting that crime is everyone’s problem.

“My heart cry is for all of us as clergy to work together with government,” he said. “There needs to be a unified head if we are to confront this issue of crime because it is not a ‘their’ problem; it is ‘our’ problem.”

Issues raised by the representatives of the various churches included the presence of security forces at federation schools; the reintroduction of social programmes, such as the Scouts, Brigades and Cadets in schools; and the role of the church in the decision and policy-making process.