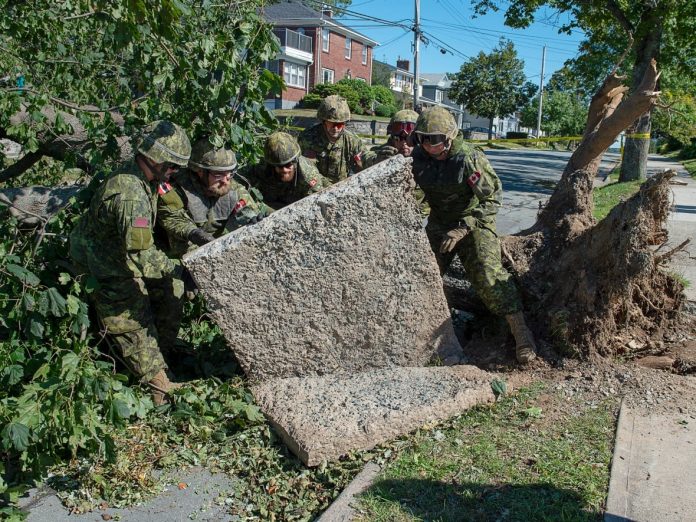 - Advertisement -
Members of the 4 Engineer Support Regiment from Canadian Forces Base Gagetown move a slab of sidewalk as they assist in the cleanup in Halifax on Monday.


Crews are continuing to chainsaw through trees and repair downed power lines across Nova Scotia in the aftermath of powerful storm Dorian, amid widespread outages and closures, including all public schools.

More than 108,000 homes and businesses were still without electricity across the Atlantic region Monday evening, and officials in Nova Scotia have warned it could be up to a week for power to be restored in some areas of the province.

“There are certain parts of Halifax that I can say, having seen it first-hand, that there are some very complex restorations that need to occur,” Nova Scotia Power president Karen Hutt told CBC’s Information Morning on Monday.

Dorian approached the region as a Category 2 hurricane and made landfall near Halifax on Saturday evening as a post-tropical storm with hurricane-strength winds.

The province’s South Shore and the Halifax area were most affected by outages, she said.

Nova Scotia Power, a privately-owned utility, is managing its restoration plan according to the path Dorian struck, Hutt said, leaving Cape Breton Island as one of the last places in the province that will addressed. The utility’s website said some Cape Breton communities may not have power restored until late Thursday night.

The Nova Scotia government will focus its efforts on restoring power and cellphone services on Monday, said Premier Stephen McNeil.

The networks of several cell providers have been down or intermittently working following Dorian.

Quebec’s Magdalen Islands were also hit by the storm, prompting worries about coastal erosion and road damage. On Sunday, almost all of the islands’ residents were without power but Hydro-Québec had restored power to most customers by Sunday evening.

Emergency management officials urged drivers to stay off the roads after snaking drive-thru lines at some of the few open fast-food restaurants impeded the path of emergency vehicles on Sunday.

With many traffic lights out at major intersections, police were also warning those who did have to drive to treat those lights as a four-way stop.

In Halifax, a parking ban is in effect on Tuesday along Beech Street. The ban will begin at 8 a.m. and will continue until the work is done — likely by Wednesday.

The municipality said the parking restriction is needed to facilitate tree removal. The ban along Beech will be from Chebucto Road to Oak Street and Quinpool Road to Geldert Street.

Public schools across Nova Scotia were closed Monday and will remain closed Tuesday.

After weekend ferry closures, Marine Atlantic is keeping an eye on the weather forecast in hopes of getting its crossings between Newfoundland and Nova Scotia back on track.

Dorian’s storm system is tracking more than 280 kilometres off Newfoundland’s Northern Peninsula into the North Atlantic.

The hurricane left 70,000 people in need of food and shelter and at least 44 dead when it struck the Bahamas last week. There are fears a “staggering” untold number of people died as thousands remain missing after the Category 5 hurricane pummelled the islands for two days.