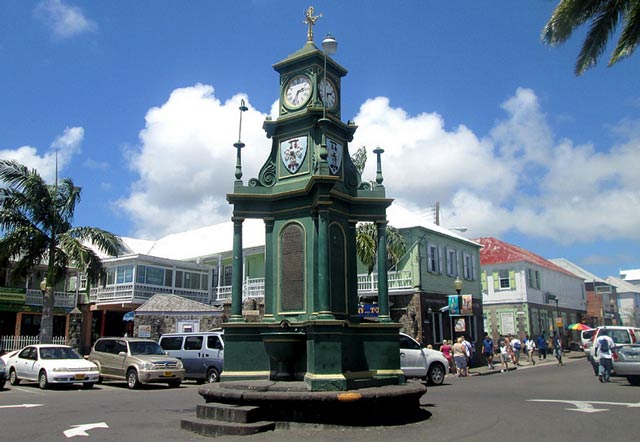 Basseterre, St. Kitts – An iconic landmark in the heart of downtown Basseterre is the key to a major historic restoration project more than 4,000 miles away in Scotland.

The Berkeley Memorial –  which sits in “The Circus,” the bustling center of St. Kitts’ capital –  was built in 1883 from a design supplied by an iron foundry, George Smith and Co., in Glasgow. It was built in honour of Thomas Berkeley, who was born in St. Kitts in 1824.  He was planter, a legislator and president of the General Legislative Council of the Leeward Islands Federation.  Berkeley was recognized for demonstrating concern for the welfare of the island’s people and for his contributions to its improvement.

In 1878, an almost identical drinking fountain built from the same George Smith and Co. cast was erected at Ballater and Main Streets in Gorbals, Glasgow.  The “Gorbals Cross” fountain featured four clock faces, four gas lamps, notice boards, barometers, thermometers and a weather vane and shields bearing the Glasgow coat of arms.  It was demolished in 1932 as the tram system in the city expanded.

Now, 85 five years later, a community group in Gorbals is on a mission to revitalize the heavily-populated, working class neighborhood.  Glasgow Caledonian University lecturers Stevie Anderson and Eddie Horn have journeyed to St. Kitts as guests of the St. Christopher National Trust to take 3-D scans and photographs of the Berkeley Memorial.  The scans are the first step in recreating the structure in Gorbals.

“We want to bring a bit of life back to the area,” Anderson told the Trust. His parents hail from the Gorbals area and he confessed a particular sentimental attachment to the project.

When the Gorbals drinking fountain was erected, it served primarily as a means of bringing running water to an area where homes did not have indoor plumbing.  There are no official records indicating what happened to the dismantled structure, but Anderson and Horn speculate that the ironwork of the project may have been needed for the war effort.

There are a few minor decorative differences between the Gorbals Cross fountain and its Caribbean twin, fondly referred to as “The Circus Clock.”

The Basseterre monument bears a different coat of arms (believed to be that of the Berkeley family), text about Thomas Berkeley and a barometer.  A directional compass sits atop the St. Kitts monument, whereas the one in Glasgow was crowned with a weather vane.  But the main structures were the same:  a modified octagonal base forming the shape of cross, containing a basin within each of the four recesses.  A single rectangular column is divided into five levels using acroteria (an ornament placed on a flat base and mounted at the apex of the pediment) and cornices (moldings or ornamentations that project from the top of a building). The upper levels are supported by four columns with lamp finials.

There were at least two other drinking fountains made from the same cast by the George Smith and Co. foundry.  Both were located in Leeds, in the United Kingdom. One was erected in 1879 at Leeds’ first municipal park at Woodhouse Moor along with a bandstand.  The bandstand was removed during World War II so the iron could be used for arms for the war, and it is believed that the fountain met the same fate.

The other Leeds fountain was mounted in 1880 in a newly opened public park at Hunslet Moor.  It was dismantled in the mid 1950s, likely to accommodate the construction of a motorway.

Visiting the Trust in Basseterre this past week, Anderson and Horn said they were both thrilled when they learned that the Berkeley Memorial was not only still standing but that the drinking fountain was functioning and in daily use.

“At least someone’s still looking after their heritage,” Anderson said with admiration.

On the south side of the monument is a basin with a tap and an inscription which reads: This drinking fountain has been erected by the country men and private friends of the late Thomas Berkeley Hardtman Berkeley, Companion of the Most Distinguished Order of St. Michael and St. George and president of the Legislative Council of the Leeward Islands, in recognition of the many valuable services he rendered this his Native Island as a Planter, a Politician and a Citizen. His Sterling qualities, his love for this Island and his deep interest in the welfare of the country at large entitle him to a Memorial by which his memory will be preserved and perpetuated.  Born 14th January 1824.  Died 6th December, 1881.”

Anderson  is using a laser to scan the monument, even ascending in an electricity company bucket lift, high above the busy roundabout, to capture as much detail as possible.

Meanwhile, Horn is using digital photography to capture the image from hundreds of minute angles.  Software will be used to stitch together the images and generate a 3-D model of the historic structure.  The model will then be used to create working blueprints and a cast.

The two engineers – who lecture in the Glasgow Caledonian University’s Digital Technology Division – reflected on how modern technology was being used in collaboration with traditional ironworking to restore a piece of history.

“We can return a piece of lost heritage back into the community,” each noted.

It has taken two years and £14,000 for this phase of the project to get to the stage where the pair is finally on the ground in St. Kitts scanning the Berkeley Memorial.  The funding has come from the Historic Environment Scotland and the Scottish Funding Council.

The actual construction of the Gorbals fountain replica is estimated to cost some £130,000.  Anderson and Horn said there is a vast amount of political support and support from the various councils and communities, and they are confident that they will have very few problems raising the funds.

“We just have to show them that it’s doable,” Anderson said with a smile.