Basseterre, St. Kitts – The tireless work and effort being put forward by the Team Unity government to help improve and advance the lives of citizens and residents of St. Kitts and Nevis have not gone unnoticed by the ordinary man and woman of the federation.

A high level of appreciation for the work of the government was expressed Nov. 5 during a Constituency #7 town hall meeting at the Edgar T. Morris Primary School in Tabernacle.

During the question-and-answer segment of the meeting, a number of individuals took to the microphone to commend the administration on a number of programmes and projects implemented since the government took office in 2015.

One resident, Glenroy Woodley, applauded the government for taking the requisite steps to compensate some 1,200 plus government auxiliary employees (GAE), once called non-established workers. Payments to those workers stopped before the Team Unity administration took office.

“Let me congratulate the government, especially on the pension for the non-established workers because that has been a sore-eye for years, and knowing that it is around the table right now, I think we should give the government credit,” Woodley said.

A pension committee tasked with devising a pension plan to benefit this category of workers, which are not entitled to a pension upon leaving government work, has since been activated. It held its first meeting with Prime Minister the Honourable Dr. Timothy Harris on May 17.

Speaking with the press unit in the Office of the Prime Minister Nov. 8, Calvin Edwards, deputy financial secretary and member on the pension committee, stated that the Pension Act to implement a pension scheme was passed in 2012, but was never activated.

“The GAE used to get a payment called honorarium, which was 2 percent of their accumulated salary per year,” Edwards said. “That payment was stopped in 2008 with the understanding that the 2 percent would instead go into their pension account. However, the pension fund was never created, so these workers are now of the view that this 2 percent is still owed to them.”

Edwards said that the committee has already made a submission of its findings and recommendations to the Federal Cabinet, which will in turn make a final determination on the matter.

He added that the information-gathering process has taken so long given the large number of people affected, but stated that it is the government’s intention to have the Pension Act activated in early 2018.

Prime Minister Harris, speaking at his press conference Oct. 3, said that the issue has been outstanding for too long, adding, “The Team Unity administration has determined that in the interest of justice to the workers, we will resolve this issue.” 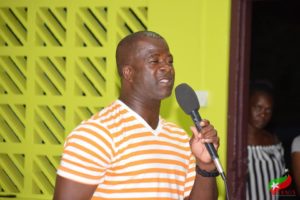