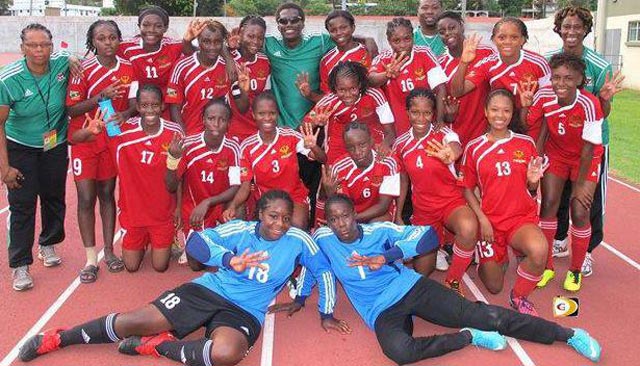 Believe it or not, it is happening in St. Kitts and Nevis.  Alistair Edwards is the first vice president of the St. Kitts-Nevis Football Assn. and highlighted some of the recent improvements in female football in the Federation.

He said, “We have improved in leaps and bounds when it comes to female football.  A few years ago the comment we heard from the outer region was how could St. Kitts have a female team when there was no league?

“Now our league is in its infancy stage, but we have a senior female league that has been going on for a number of years and we just started an under-16 female league.”

He said the caliber of players has improved and are putting together some solid strategy for scoring goals and winning. He predicted next year will be a busy one for female players as they take part in three different competitions — senior, under-16 and under 14.

Mr. Edwards was emphatic as he spoke about how his association is working to create interest in female football, especially for younger girls.

“We started in the schools for one and are breaking the stigma that football is a male-dominated sport,” he added. “Our efforts are being made easier since we are seeing a lot of world cup football as well as female football and college football out of America. We are definitely widening the scope.”

He said opportunities for female football players in the Federation are improving and that many of them may qualify for a college education through the sport.

“Colleges in the United States are after female footballers.  Our prime examples include Astonia Carey who went off on a football scholarship and Kerease Hanley who did the same.” He said their success has motivated a growing number of younger girls to get into the sport.

“There are opportunities for young women and they are beginning to recognize this,” he declared.  “These are not far-fetched names — these are names they know. They have seen them play in our local league and watched them go on to football scholarships. It is beginning to open their eyes and they see it from a different perspective.”

In 2011, the SKNFA inaugurated the Elvis ‘Star’ Browne female football league to honor the woman of the same name who passed away that same year. She was one of the pioneers of female football in St. Kitts and Nevis. Since then, the SKNFA grassroots program has grown to promote female players.