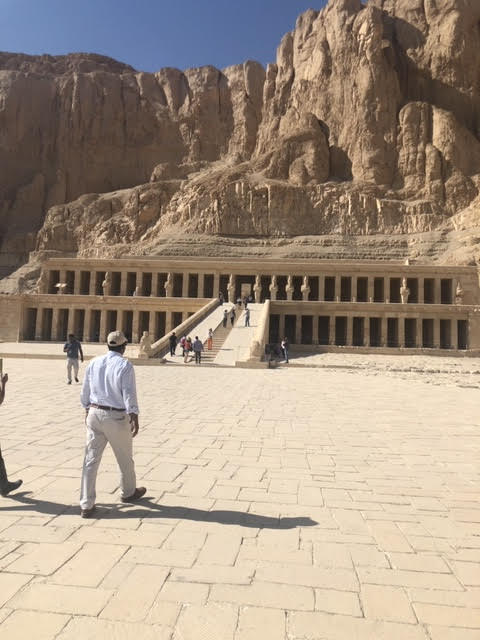 - Advertisement -
TRAVEL: BY ERIC MACKENZIE LAMB
(Unless otherwise noted, all images by the author)
Nowhere is the expression water is the essence of life more apt than in Egypt. With the exception of a few Nomadic tribes and military personnel in the the Sahara and Sinai deserts, ninety-six percent of the country’s population of slightly over a hundred million people live within a few miles of the Nile or its delta.
To give you an idea of the extent of the country’s human compaction, here’s a satellite image of greater Egypt and the lights along the Nile during the hours of darkness. 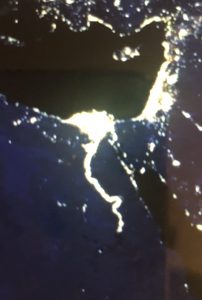 Courtesy of Living Earth
The Nile is,  in fact, the world’s longest river. It spans 4,258 miles and flows through eleven African countries as it makes its way from Lake Victoria in Uganda (where it’s known as the White Nile) to the Mediterranean Sea. Not far from the Sudanese capital, Khartoum, the waterway is joined by the Blue Nile, whose own waters originate in the mountains of Ethiopia. Their combined volume flowing north from this junction increases to a staggering 79.2 billion gallons per day, yet it takes three months for it to reach the Mediterranean from its source.  Floods are frequent from June to September (although there’s far less destruction to man-made structures and crops since the Aswan High Dam was built in 1970). From October to mid-February is when farmers plant their subsistence along the shoreline, taking advantage of the rich and nutritious black silt deposited during the preceding floods. Harvesting takes place between mid February and May. (The Nile is still referred to by some as the Father of Life and even has its own deity: Khnum, the god of water, who is celebrated after each successful harvest).
Still, despite today’s modern irrigation systems which have greatly increased fertile areas suitable for farming, the desert is never far away. 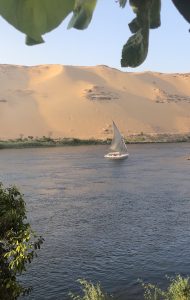 So it should come as no surprise, considering its unique location in the middle of an arid nowhere, that the Nile also serves as a refuge for a vast variety of wildlife, especially in the south, such as rhinoceros, African tiger fish, hippopotamus, wildebeest, baboons, and, to the north, catfish, frogs, turtles, tortoises, camels, wild donkeys, deer, jackals,rabbits, and snakes. And that’s without mentioning one of the area’s  most fearsome predators, the Nile crocodile. With some reptiles growing up to twenty feet in length, these aquatic carnivores are  far more aggressive toward humans than their counterparts in other areas of the world. In fact, statistics indicate that they’re responsible for the deaths, on average, of at least two hundred people each year along the Nile. So please take heed and forget that skinny dip! 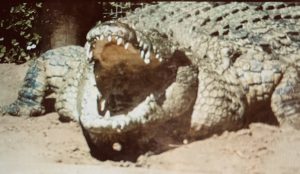 Also, on a more pleasant note: during the winter months, the Nile Delta becomes the playground for hundreds of thousands of migratory birds from over 300 species and has long been renowned among ornithologists and nature lovers.
My first visit to Egypt was partly motivated by the fact that one of my family’s Scottish ancestors, the missionary and explorer David Livingstone, had tried, but failed, to find the source of the Nile during the early British colonial period of the 19th century, when much of the African continent was still unknown.  I arrived in Egypt during the month of November, generally considered the most comfortable time of year where temperatures are concerned. It’s also very special when it comes to natural light, especially if you’re a photographer. My means of travel was the Oberoi Zahra, a luxury Nile cruiser with five decks and a total of twenty seven cabins, including two suites.  Compared to other vessels,  it wasn’t cheap. But knowing the impeccable standards of Oberoi’s hotels and resorts from a previous visit to India, and the fact that there would be far less people in our privately guided tours, I knew that this was the right choice for what would turn out to be a unique experience. And, more importantly, a chance to learn first hand about Egypt’s  amazing history. 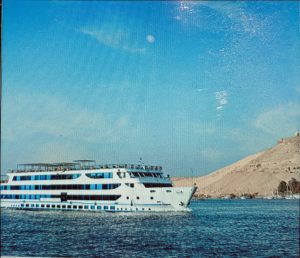 The Oberoi Zahra (courtesy of Oberoi Hotels and Resorts).
On average, the Nile’s depth ranges from five to twenty-five meters (16.5 to 82 ft), which is why most Nile cruisers, whether motorized or sail, are built with shallow hulls. This enables them to go to areas where conventional vessels could not, a key factor in being able to dock only a few hundred feet from most archaeological sites. Generally, the most popular cruises are those between Aswan and Luxor, or in the reverse direction, which cover a distance of about 112 miles within five to ten days, depending upon itinerary. Other charter vessels frequently seen plying the river are fellucas, open top sailing boats whose rudimentary design dates back thousands of years, as well as dahabiyyas, a larger and more upscale version providing guests a touch of comfort and even luxury. All in all, it’s estimated that there are no less than 300 boats of all sizes and shapes operating on the Nile, all of which clearly demonstrates how important archaeological tourism has become in Egypt.
Once settled on board the Zahra, we were provided a comprehensive lecture each morning after breakfast about the sites which we’d be visiting later that day. These were given by the ship’s Egyptologist, Ahmed Mustafa, who would also act as our guide. The enjoyable sessions also gave us the opportunity to meet and get to know our fellow travelers, whose nationalities included Americans, Canadians, British, French, Germans, Australians, even a family from Mexico.
About an hour later, all passengers were asked to meet at the ship’s disembarkation area. That’s when the adventures really began.
Over the next five days, we visited world famous archaeological sites such as Abu Simbel, Kom Omni Temple, Valley of the Kings, the Temple of Edfu,  Essna, the Temple of Karnak, and the Luxor Museum, as well as other attractions.
Truly amazing was the fact that the original colors of many of the hieroglyphic carvings we saw were still vibrant after thousands of years, undoubtedly due to their having remained in total darkness before finally being discovered and excavated. (Some other sites were not so lucky; they had long before been broken into by tomb robbers). One of the greatest feats was the discovery of the Rosetta Stone, which was found by a team of archaeologists sent to Egypt by the French Emperor Napoleon. Inscribed in three languages, including Ancient Greek, it paved the way for what would eventually become the translation of hieroglyphic writing. 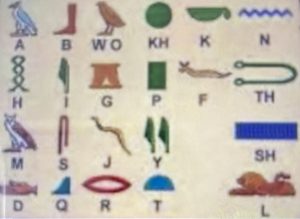 In 1813, the Temple of Ramses was discovered by Johan Burkhardt, a Swiss archaeologist, and Giovanni Bellini, his Italian colleague. On the site of the Valley of the Kings, also known in ancient times as The Gateway to the Afterlife, it took Howard Carter, a British archaeologist, eleven years before he discovered the tomb of King Tut. And even today, new discoveries are still being made.
As the saying goes, a picture is worth a thousand words.  Due to limited space in this article, it’s impossible to show them all. But here are some of the highlights. 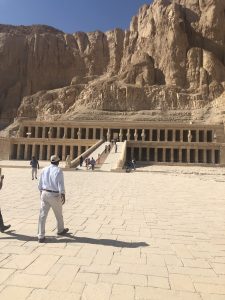 Ahmed, our Egyptologist, leading us to the Temple of Hatchepsut. 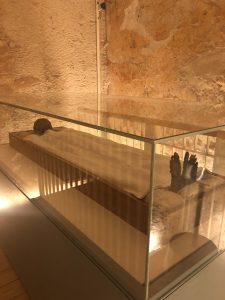 The mummy of King Tut 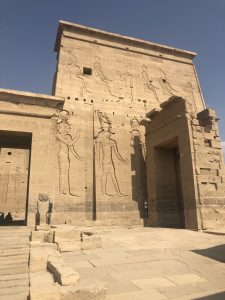 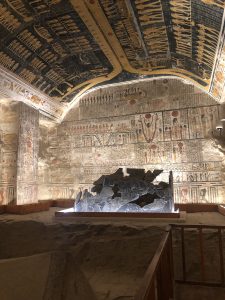 Burial chamber of King Ramses VI, Valley of the Kings 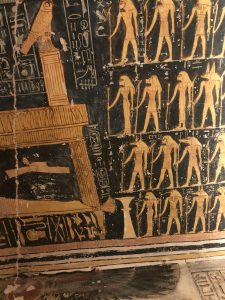 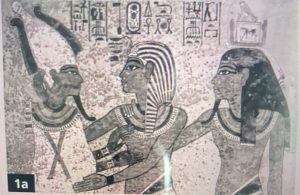 Tutankhamen (center), and his spirit double (right), being welcomed to the Underworld by Osiris (left). (Courtesy of the Egyptian Tourism Department). 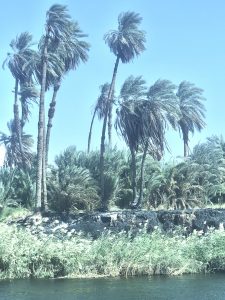 One of our last views of the banks of the Nile before our departure.

And finally:
Thank You, dear Reader, for joining us in this memorable glimpse into one of our world’s most ancient civilizations. It was a pleasure to be your (virtual) guide from six time zones away.
Isn’t modern technology amazing?
- Advertisement -