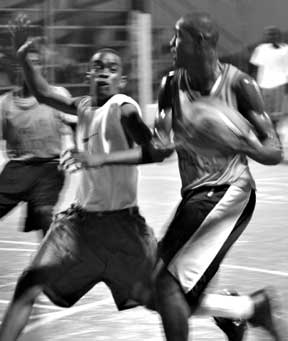 The first regular season game for the Junior Division saw the defending champions Williams Electrical Hitters taking on the relatively new kids on the block the ODB Sandy Point Fruta Falcons. Sandy Point has been out of the Junior Division for a number of years and there opening game performance showed no indication of there long absence.

The rural west team got off to a flying start as they seemingly took the defending Junior Division champs Hitters by surprise as they matched the champs shot for shot throughout the entire game.

The end of the half saw Sandy Point with a slim one point advantage. The second half saw an increased level of enthusiasm by the Hitters team, however it was quickly countered by the exceptional play of guard Javal Hodge who had 12 points and a game high six assists. The Sandy Pointers exhibited much composure as they staved off a late fourth quarter charge to end the game four points better than the defending champs and thus earning a 60-56 victory to mark a grand return to the junior league.

Sandy Point went on to beat St. Pauls Tuff Knots and McKnight Trotters to end week 1 with a 3-0 record.

Hitters rebounded after there two losses in the knockout and there first regular season game by convincingly defeating both Trotters and St. Pauls .

The McKnight Trotters have yet to record a victory with huge losses against Sandy Point and Hitters.

The pre-season favorites and knockout champions the Bird Rock Uprisers were in for a huge surprise when they took on the Blue Devils on Saturday evening.

In what turned out to be an exciting upset the Blue Devils pulled off a spectacular victory. Led by Rovan Wigley with a massive 26 points 17 rebounds and 8 steals.

Yogi Jacobs and Eustus Hanley had 13 and 16 points respectively for Blue Devils.

The loss was hugely disappointing for Bird Rock who based on there player personnel and pre-season knockout championship were seen as Junior league title favorites.

Other interesting twists in the Junior league is the great start by the Blue Devils who were widely seen as the league doormats prior to the start.

However with huge wins over Bird Rock and Cayon the Blue Devils join Sandy Point as the only undefeated teams in the junior division. Cayon and Trotters are both the cellar dwellers of the division with neither having a victory to there credit.

Bird Rock managed to get some redemption from there unexpected loss by obliterating Western Union Cayon 76-28.

Cayon was forced to forfeit the last half of the game as three of there players were fouled out leaving just four players.