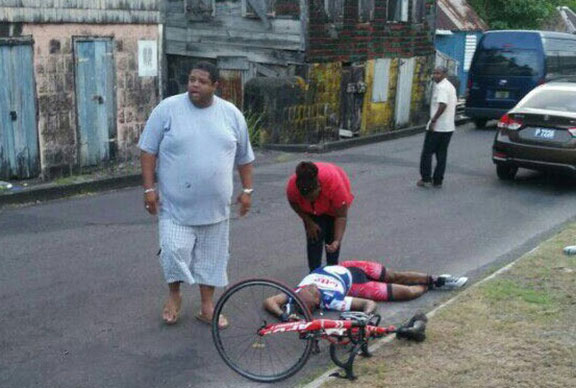 The alleged driver of a vehicle that was involved in a hit and run accident, and for whom police had sought the public’s assistance in locating, was arrested and charged for the Friday afternoon (Jun. 3) incident.

A police release stated that Anthony Anderson of The Alley in Sandy Point was arrested and formally charged without warrant for the offence of leaving the scene of an accident.

Speaking with the Commander of ‘B’ Division, Superintendent Lionel Moore, The Observer was told that Anderson went to the Sandy Point Police Station the day after the accident occurred and was charged following investigations.

On the day of the accident, Superintendent Moore, who was present at the scene after the matter was reported to the police, had informed that a young man was riding his bicycle in an easterly direction along the island main road in the Halfway Tree area when he was struck by a car from the rear.

He said investigations revealed that after being struck, the cyclist fell to the ground and the driver had fled the scene and did not report the incident to the police.

The Divisional Commander also said that the cyclist was seriously injured and had suffered a broken bone, but he could not positively say to which part of his anatomy.

The young cyclist was transported to the JNF General Hospital. However, attempts were made by this media house to ascertain if he was still a patient at the medical institution, but at press time they had proven futile.