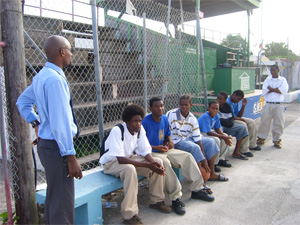 With more and more of the nation’s youth engaging in delinquent or criminal behaviour, one young professional is doing his part to combat this by initiating after-school sport programmes in the high schools.

Dr. Garfield Alexander, a native who received his medical training in Cuba said he felt that the schools could do more to find creative ways to occupy students’ down time.

“Today’s young people are slipping away from us, plunging further and further into the abyss of delinquency and we seem to be sitting by idly and letting it happen. I realised that the high schools no longer have basketball teams like they did when I went to school. The school basketball provided not only a place to display sporting talent, but it gave us something to do between the time school was over and the time we had to be inside doing homework or chores. Today the young people leave school at 3:30 p.m. and spend hours liming or getting themselves into things they shouldn’t. We have to get them off the streets and get them into something positive and constructive like sports,” he said.

Alexander said he approached the principal of his alma mater, Basseterre High School who was very supportive of the idea. She assured him that the funding to make the school basketball court ‘playable’ was available.

He said that although some of the teachers were supportive of the initiative, he still faced other challenges getting the programme off the ground.

“This is not about me or any one person attempting to make a name for themselves. All the talk about providing constructive outlets for these kids usually end up as just that…talk. Schools, private individuals and even the corporate sector need to get involved. Right now the kids cannot practice at the school because the basketball court needs the rims and nets. The kids need uniforms and basketball gear. They are willing to do the right thing, they just need some support,” he stated.

Alexander said that from his point of view, the time the youth spent practising basketball meant less time for them to get into trouble. He added that even the so-called troublemakers could benefit from these types of programmes.

“A lot of times you hear some of those in authority say they don’t want to have any dealings with the ‘bad boys’ and although I get where they are coming from, I take a different approach. Some of these boys turn to that negative lifestyle because no one took an interest in them to begin with. These types of programmes provide excellent opportunities to teach our young people discipline, teamwork, time management and even a sense of responsibility. Who knows, maybe a programme like basketball will be the key to turning some of them around and getting them on the right track,” he said.

The Observer spoke with one of the teens at one of the afternoon practice sessions. Dr. Alexander had met the fifteen-year-old when the third former was admitted to the emergency Room with a stab wound he had received at school.

“I like playing ball and I practice about three times a week. Before I had practice I would hang out in town after school. I would really like for our school to get a team organised so that I can develop my skills.  My dream is to make it to the NBA one day,” the youngster said.

Alexander said he wanted to encourage individuals and corporate citizens to take a vested interest in the nation’s future and give support to the youth whereever possible.