Facebook
Twitter
Pinterest
WhatsApp
The Security Forces Football Team also known as the “Polstars FC” has been named the Easter Cup and Final Four Tournament champions for the 2018-2019 season. This accomplishment has landed the team a spot in the St. Kitts and Nevis Football Association (SKNFA) Premier League.
Inspector John Bergan, Team Manager, said that they competed against teams like the KFC Trinity/Challengers United, Hard Times and the Trafalgar South Stars who they defeated for the championship title on May 14, 2019.
The team comprises of members from the Police Force, St. Kitts-Nevis Defence Force, Fire and Rescue Services and Her Majesty’s Prison. It currently consists of three (3) coaches, a fitness trainer, kit manager and thirty-three (33) registered players.
Bergan said that the team was formed as “a means of fostering good relationships with the community and it also offered young officers a chance to display their talent on the national football stage.”
“In those days, football was and is still the number one sport in the Federation,” he said.
He highlighted some challenges that the team faced in the 2018-2019 season.
“We had our challenges, but we overcame every one. We are the only team in the Federation who does not have its own training grounds and that was a major challenge for us,” he stated and added that they were able to get permission to use the FLOW Grounds at Needmust and the Conaree Playing Field.
He also noted that heading into the playoffs, they faced a major hurdle with insufficient team jerseys but were able to procure them through social partnerships.
“The success of the Security Forces Football Club is a result of the overwhelming support of a number of persons and social partners,” said Bergan, adding that it was important to get the players and superiors to believe in the team so that the fans and social partners can buy in as well.
The football club has been a member of the SKNFA since 1963. 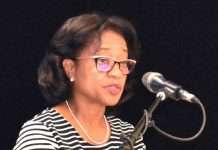