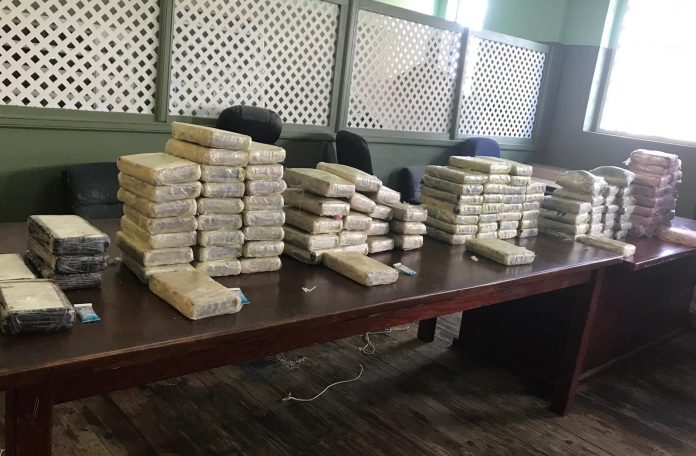 Members of the security forces seized 136 kilos (close to 300 pounds) of cocaine following a search carried out Monday at the Coast Guard base on a yacht that ran aground Sunday at Pump Bay, Sandy Point.

The street value of the cocaine is estimated at over $12 million Eastern Caribbean Dollars. Just over 120 packages of cocaine had been discovered.The joint response was made following a report that a yacht had run aground.

“I would like to commend our officers in the Anti-Narcotics Unit, the Special Services Unit (SSU), Customs, and the Defence Force and Coast Guard for their courageous effort in effecting this operation. In recent times, we’ve had a number of reports of vessels entering the waters of the federation and conducting illegal transactions. We have to be relentless and aggressive in protecting our borders as best as we can, Assistant Commissioner of Police (ACP) with responsibility for Operations, Adolph Adams, said.

“We have to thank the members of the Sandy Point community for being forthcoming with the information that led to the seizure which I am told is one of the largest cocaine busts in the federation. Presently, a suspect is at large and being sought by the police as investigations into this matter are ongoing. Anyone having any useful information in relation to this matter are asked to call anonymously,” he added.

Persons with information regarding the incident are asked to contact the Sandy Point Police Station at 465-6261, their nearest Police Station of the crime hotline at 707.