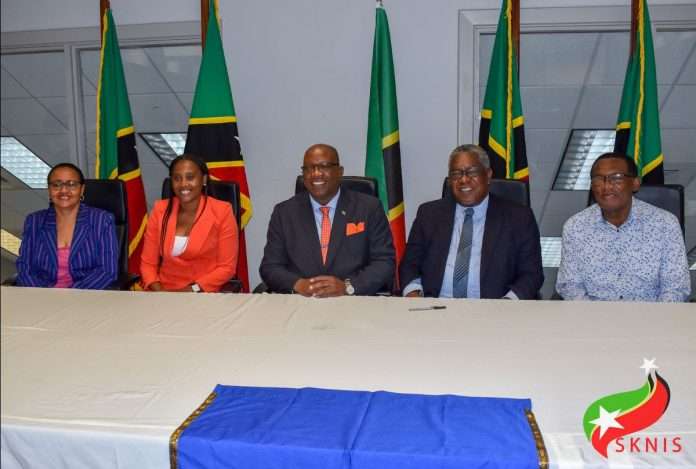 BASSETERRE, St. Kitts, May 11, 2022 (Press Unit in the Office of the Prime Minister) – Permanent Secretaries in the Government of St. Kitts and Nevis were today, Wednesday, May 11, 2022, presented to the reshuffled Cabinet of Ministers to whom they now report following Tuesday’s (May 10) announcement by Prime Minister Dr. the Honourable Timothy Harris.

In his address to the nation, the honourable Prime Minister announced that he had asked His Excellency the Governor General, Sir S. W. Tapley Seaton, to revoke the appointment of Minister of Government for six members who, for weeks, failed to attend meetings of the Federal Cabinet. This includes former Deputy Prime Minister the Honourable Shawn Richards who had been absent from Cabinet meetings for over the past 91 days or 13 weeks.

At Wednesday’s brief meeting at the Ministry of Finance Conference Room, Prime Minister Harris recorded his profound gratitude to the senior civil servants for their hard work over the last seven years and encouraged them to continue to provide faithful and professional service to the Government of St. Kitts and Nevis.

“We have relied upon and we want to [continue to] rely upon a skilled, motivated and efficient civil service with a professional ethos. That is critically important—the professional ethos of the civil servants. And so, we are expecting that each and every one will deliver professional service. I expect that the Ministers will have the fullest cooperation and support of every Permanent Secretary in general, and those who are directed to report to them by way of the Constitutional mandate and the reorganization of the Cabinet,” Dr. Harris said.

Following its meeting with the Permanent Secretaries, the Cabinet of Ministers then held similar discussions with the Heads of Department within the Ministry of Finance and the High Command of the Royal St. Christopher and Nevis Police Force, the St. Kitts and Nevis Defence Force and the Coast Guard Unit.