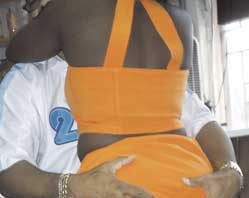 A major scandal exploded in the Federation when hundreds of images of local women — stripping and performing other sexual acts — circulated through out the community over the last couple of weeks.

Commissioner of Police, Robert Jeffers, said the women in the pictures were clearly breaking the law.

“According to the Laws of the Federation, ‘Any person behaving in a public place in an indecent manner, shall be liable to imprisonment for a term not exceeding one month,’” Jeffers said.

Jeffers said the Police Force is conducting an investigation into the matter. With more than 700 pictures for evidence, Jeffers said he would not comment on whether the women would be arrested.

“I am not going to comment on that right now,” Jeffers said. “We are still looking into the matter.”

Most of the images appear to have been taken at Why Not Bar and Why Not Grab Sandwich, which was owned by the late Lorenzo Greene.

Greene — who was a popular DJ known as the Mean Machine — was found murdered in his home on Dec. 19.

Police said Greene was found bounded and lying in a pool of blood on his bed. His wife, Michelle, was found critically wounded. She later died at the Joseph N. France Hospital.

Four months later, hundreds of lewd images of residents of the Federation, have been circulating on CDs and the Internet.

The question has been asked, as to whether Greene and his wife were murdered because of the sexual activities that were taking place at his establishments.

“Since these pictures have come to light, yes, we have to proceed along that line,” Jeffers said. “We will investigate whether there is a link between the double murders and these pictures.

“At this point in time we have no evidence that there is a link between these two things. However, we are looking into this to see if there is a possibility. Also bear in mind that the investigation is ongoing, so you do have to pursue every possible angle.”

Jeffers said the investigation into the double murder of Greene and his wife is still ongoing, and that evidence is currently being analyzed in laboratories across the region and internationally.

“These things take time, but we are hoping to get some results soon,” Jeffers said.

Jeffers said police have yet to identify any suspects in the case.

“We have interviewed a number of persons, but I would not want to categorize anybody as a suspect,” Jeffers said.

It appears Why Not Bar and Why Not Grab Sandwich was providing sexually explicit entertainment to customers.

In some of the pictures local women, some of them well known in the community as entertainers, are naked as they pose on chairs, stools, the bar and tables.

One of the girls, who said she was a model, said she got paid to pose and dance naked at Why Not Bar.

“I don’t care what anybody have to say. I was not doing it for free and I got paid,” said the model, who said she wished to remain anonymous. “People keeping up a fret and I’m not. I already made my money.

Not all of us got paid, some of the girls did it for free because they got drunk. But I got paid.”

The young model said in one night she got close to $500 from the bar, and then got another $600 when she accepted an invitation to strip on a yacht docked at Port Zante.

The young model would not confirm whether or not Greene paid her to strip in his bar.

“But he was there taking pictures,” she said.

The Observer recently obtained a CD with close to 700 pictures of local women, and men in various sexual poses. In some of the photos Greene could be seen posing with some of the women and smiling directly into the camera.

Another local woman who appeared in the photos said at time it did not seem like a big deal. She said Greene at times used a video camera at the sessions

“We were all close friends and were just having fun,” she said. The woman, who is a mother, said the atmosphere was more like a private party and it was not for the general public to know about.

“It is like if I am naked in my house with my man and we take pictures. Those pictures were for our own use! We were all adults there. The person who is making copies of the CD and selling them to people is the person who should be criticized and even arrested.”

Jeffers said people should stop making copies of the pictures to distribute to friends and family members.

“I must admit somebody sent me a few of them electronically and it is nudity. Now in our laws it is an offense to publish obscene prints. The problem that I have is finding out who is publishing them and how do we proceed.”

Jeffers said it is still unclear just how the photos came to be taken, and whether the ladies photographed had consented — not only to have their picture taken — but to also have them distributed in the Federation and internationally.

“According to the law,” Jeffers said. “Any person willfully exposing in any public place obscene print, pictures, photograph exhibition… shall be liable.”

Jeffers said police would look into matter because he has information that a child under the age of 16 may have been involved in the scandal and may have participated in some of the sexually explicit activities.

Greene was breaking the law when he allowed the women to strip at his business. Jeffers said Why Not Bar and Why Not Have Sandwich were public places from customers.

“If it was done in a person’s bedroom, well that was up to them. We all have different values. Now, one of the young ladies said she trusted the person who took the photos. Now if the person betrayed these girls’ trust then it is very bad. These girls must know what they are getting into.”

“Yes a mistake was made,” Sensia said. “Through alcohol and maybe bad judgment, mistakes was made.

“But people need to understand that this was probably not the first time this has happened and probably would not be the last. People need to get off the backs of these girls and look at their own lives. “A lot of people have bones in the their closets and they are still talking. Leave the girls alone. They know they made mistake. Leave them alone and let them get on with their lives.”

Linda Adams, Permanent Secretary in the Department of Social Development, Community and Gender Affairs, said her ministry strongly condemns the creation, distribution and sale of all pornographic material.

“The recent discovery of such material and the intense interest displayed by individuals to view the material is a clear indication of the loosening of the moral fabric of our society,” Adams said. “Such material objectifies women, exploits them and presents women solely as sexual objects to be used for the sexual gratification of others.”

Adams said, as a result of the stereotypical profiling women are often viewed as sex objects.

“However, women are significant contributors to the development of our country and must be viewed in this light at all times.

“The Ministry therefore urges all citizens to desist from circulating any pictures that devalue our women.”