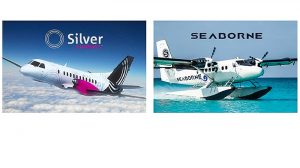 The acquisition brings together two strong independent airlines with similar Saab 340B fleets, complementary route networks and common codeshare/interline partners. With the upcoming deployment of Silver’s recently announced new fleet of state-of-the-art ATR-600s across both networks, the combined airline will have an expanded range, allowing it to better serve passengers and markets while creating more opportunities for employees and greater value for its business partners.

“I am thrilled to welcome the Seaborne team members to the Silver family as together we create one of the nation’s leading independent airlines in a transaction that will benefit our guests, team members, and the communities we serve, as well as both airlines’ valued codeshare and interline partnerships with most major U.S. carriers,” said Silver Airways CEO Steve Rossum.  “This transaction brings together two strong and historic independent airlines with amazing employees, an excellent track record of operational safety, respect for our people and our communities, and great service for our passengers.”

“We at Seaborne are excited about this partnership with Silver Airways and the opportunities that it can provide,” said Seaborne CEO Ben Munson. “Despite the devastating impact of hurricanes Irma and Maria, our resilient and dedicated employees at Seaborne have successfully restructured our company with the support of our loyal passengers. We are well positioned to grow with an airline that shares our common goals of success, and are very pleased that San Juan and the U.S. Virgin Islands will continue to be significant for Silver and Seaborne.”

The combined airline will continue operating Silver’s route network in the Bahamas, Florida, and beyond under the Silver Airways banner and Seaborne’s route network throughout Puerto Rico, the Virgin Islands, and the Caribbean under the Seaborne name. The total fleet now consists of 31 aircraft, including Saab 340 and de Havilland Twin Otter seaplane aircraft.  Silver is also the North American launch customer for the eco-friendly ATR-600 aircraft in the U.S. Silver took delivery of the first 46-seat ATR-42 earlier this month and has a firm order for 19 additional ATR-600s and up to 30 additional purchase rights.

Tickets for Silver Airways will continue to be available on SilverAirways.com and bookings for Seaborne will continue on SeaborneAirlines.com. Seaborne passengers will be able to earn and redeem frequent traveler miles under Seaborne’s SeaMiles program. Initially, Seaborne will continue to operate under its own certificate as a standalone operating subsidiary of Silver. The merger of the two airlines’ operating functions, joint branding, and streamlining of the guest experience is expected to occur during the next year.

Steve Rossum of Silver Airways will serve as CEO of the combined airline. Ben Munson will resume his role as president of aviation consulting firm Embark Aviation, and continue as a valued advisor to the company. The combined airline will employ nearly 1,000 aviation professionals and will be headquartered at Silver Airways’ offices in Fort Lauderdale under the leadership of executives from both Silver and Seaborne. Corporate and operations support functions will continue at locations in Fort Lauderdale, Orlando, Tampa, San Juan, and St. Croix, U.S.V.I.