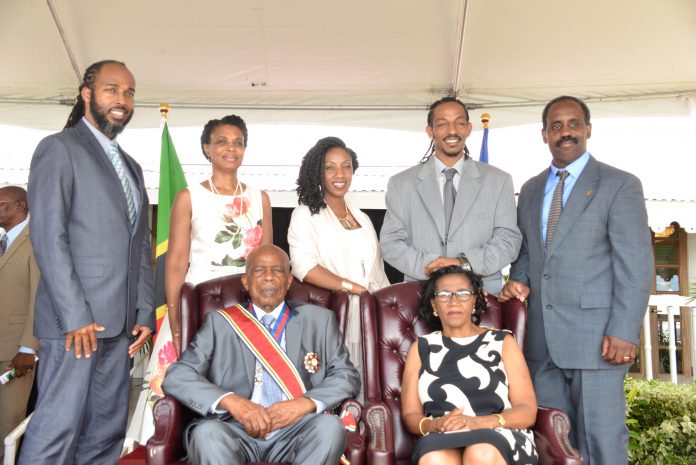 Former Prime Minister and National Hero, Sir Kennedy Alphonse Simmonds has released an autobiography chronicling his life from his early days as a boy living at Rosemary Lane in the center of Basseterre through his primary and grammar school days, before going on to become a medical doctor and then the last Premier and first Prime Minister of St. Kitts and Nevis.

Simmonds, who is now retired from both politics and medicine, says the book, entitled “The Making of a National Hero,” covers many topics that affected his life and characterized his tenure in government. It also shares some of his passions, including football, cricket and tennis — the former Prime Minister represented St. Kitts in cricket and football, while also racking up various awards in tennis, a sport in which he is still invold.

Readers will have the opportunity to gain insight into important political issues, including the formation of the People’s Action Movement, (PAM); the historic 1980 elections that paved the way for the PAM/NRP coalition; the road to independence in 1983; the two commissions of enquiry; the 1993 election impasse; the State of Emergency over the forced acquisition of his West Farm lands by the Bradshaw administration; and his career as a medical doctor in St. Kitts, Nevis, Anguilla, USA and Bahamas.

The autobiography also looks at secession for Nevis, and how Simmonds worked with another National Hero, Sir Simeon Daniel, to avert the separation of the two islands. Simmonds gives much credit and praise to Daniel for his role in facilitating the twin-island country’s independence in 1983. Simmonds also discusses the Christena Disaster of 1970, when scores of Kittitians and Nevisians lost their lives on Emancipation weekend.

Two events will be held next month in St. Kitts and Nevis to formally launch the autobiography: at the Methodist Church Hall, (Old Boys School), St. Kitts on Dec. 19, and the Anglican Church Hall, in Charlestown, on Dec. 20. The launch ceremonies, which are open to the general public, will include book signings.

The book has been released on Amazon and is available in kindle format. The books will also be sold at local bookstores in Charlestown and Basseterre.

St. Kitts and Nevis’ first Prime Minister held the office from 1983-1995 and served as Premier from 1980-1995. He also served as Political Leader of PAM, from 1975-2000. He made history as the first living national hero when he was conferred June 28, 2016 with the highest award of the country, the Order of National Hero.

He is married to lady Mary Simmonds and has five children.