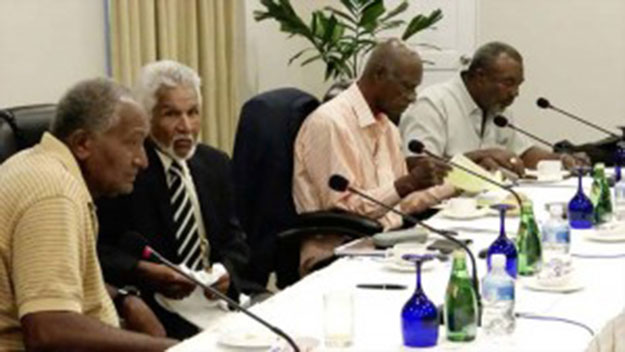 Following numerous issues between players and the Wycliffe ‘Dave’ Cameron-led West Indies Cricket Board (WICB), which include financial woes and alleged mismanagement, and in keeping with the recommendation of the CARICOM cricket review panel, a number of legendary cricketers are calling for the dissolution of the region’s governing body of the sports discipline.

The panel was appointed in the wake of the crisis that emerged following the West Indies’ withdrawal from India’s tour in October 2014 and its members had also recommended the appointing of an interim committee as part of the structural reforms that would enable the region’s cricket to “develop and flourish”.

According to an ESPN Sports Media Ltd. report, converging under the umbrella banner of Cricket Legends, a number of cricketers met with Grenada’s Prime Minister the Hon. Keith Mitchell on Thursday (Apr. 14) on that island where they decried the Board’s “oligarchic structure” which has remained “unchanged in attitude and structure” for seven decades.

The Legends who met and held discussions with PM Mitchell are Sir Garfield Sobers, Vivian Richards and Andy Roberts, while Charlie Griffith, Desmond Haynes,  Deryck Murray, Roger Harper, former President of the West Indies Players Association Dinanath Ramnarine and Rudi Webster, who wa the team manager during the Clive Lloyd’s era, were all guests at the meetingn.

A press release from the Legends said: ““During the last two decades, many different presidents and CEOs have led the West Indies Cricket Board (WICB) and yet, its performance has declined steadily with each passing year.

“The Board is an oligarchic structure that considers itself answerable to no one but itself. It is one of the few sporting institutions that have remained virtually unchanged in attitude and structure in the last 70 years or more.”

The Legends agreed with the CARICOM panel’s view that the WICB was accountable to various governments in the Caribbean and that it could not shield itself from such vehement opposition by calling itself a private body. The y.
The release made reference to the Australia and New Zealand Cricket Boards, noting that they had overhauled their governance structure for the better and that had been reflected in their various teams prospering in all forms of the game.
They also pointed out that the BCCI, the most powerful cricketing board, was under pressure from India’s Supreme Court to open up to radical reforms to its governance structure.

“Inexplicably, the WICB prefers to maintain the status quo and yet, it expects to get different results while it continues to do the same things. We believe that revival of West Indies cricket will only happen when the Board undergoes structural adjustment, and when it improves the quality of its communication and leadership, and upgrades the management of key relationships,” the release said.
Following the CARICOM-appointed review panel’s report in which it stated that the Board was “obsolete”, the WICB rejected the report saying that none of the territory’s Cricket Boards, their directors, clubs or representatives was present at the reviewing process. Therefore, the panel’s findings were not supported by facts.

ESPN Sports Media Ltd. pointed out that although some of these former players have voiced opposition against the WICB in the past two decades, this is the first time they have formed a united front of opposition.

“We are very proud of our legacy,” the release said. “We cannot now in good conscience stand idly by and watch everything that we fought so hard to build and achieve disappear right before our eyes because of the actions of inept Board members and an incompetent Board.”

The Legends have proposed the following:

Meanwhile, according to West Indies broadcaster Samuel Crosskill, after so many years of drama between the current players and the WICB, one could understand why the idea of dissolution was forwarded.

“Not I fully understand the frustration being felt by the players and the Prime Minister of Grenada, Dr. Keith Mitchell, who is Head of the CARICOM Sub-committee on Cricket and who is leading the call for the dissolution of the Board, even though one of those members of the Sub-committee on Cricket, Gaston Browne of Antigua/Barbuda, the Prime Minister there, does not agree with the Committee’s call for the dissolution of the Board, neither do I,” Gaskill said.

He explained that the WICB is an incorporated company; a private entity that is made up of directors from the six Territorial Boards – Barbados, Guyana, Jamaica, Trinidad and Tobago, Leeward Islands and Windward Islands. “So I don’t think they plan to dissolve those as well.”

The broadcaster explained that the panel that recommended the dissolution of the Board, which was appointed by the Sub-committee, had used Sri Lanka Cricket Board as an example. He pointed out that with the dissolution of that Board, an interim committee was established in its place but about a year later that too was dissolved.

“But not only that!” he exclaimed. “In Sri Lanka the interim committee is appointed by the government through the Sports Ministry. Now we don’t want that in the Caribbean. What we want is better governance from the West Indies Cricket Board as has been recommended by three different reports into the running of West Indies cricket.

“Now, if the committee focuses on that, I think they will have more success than this call for dissolving the Board. I don’t see how it is going to happen. It doesn’t make any sense to me!”