The St. Kitts and Nevis Athletics Association commended The Development Bank of St. Kitts and Nevis for its support in sponsoring the national team to take part in this year’s now-postponed Carifta Games in Bermuda originally slated for April 10-13.

“I want to thank the Development Bank of St. Kitts and Nevis for taking the initiative for donating towards our team for the Carifta Games that were slated for the 10th to the 13th of April, which since then have been postponed by the Bermuda local organising committee,” said President of the St. Kitts and Nevis Athletics Association, Mr. Delwayne Delaney.

Word coming out of Bermuda on Friday March 13 stated that the Bermuda National Athletics Association had announced that 2020 Carifta Games had been postponed due to the coronavirus outbreak. The decision was taken after Antigua and Barbuda, Bahamas, and the Cayman Islands would have announced their withdrawal from the competition.

Local athletic meets, the Ram’s Inter Primary School Athletics Competition scheduled for March 21-22, and the TDC Inter High School Championships scheduled for March 27-29, which would have been used as trial games to select a national team for Carifta Games, were also postponed.

“We want to take all necessary steps in ensuring that athletes, patrons, stakeholders, everyone is safe during this time and we will continue to keep our ears to the ground in terms of when we would resume normalcy as it relates to critical sports meets moving forward,” said Mr. Delaney. “We understand the seriousness of the coronavirus and I want also to commend the Development Bank for the steps that they have taken in ensuring to keep not only their customers safe but also locals on a whole in putting their necessary measures,”

Out of abundance of caution, the bank on Tuesday issued a public notice requesting individuals who would have returned from overseas within the last 21 days and who would wish to conduct any business with the bank to do so either by phone or email according to Ms. Vernitha Evelyn, Development Bank of St. Kitts and Nevis’ Marketing Officer.

The Development Bank official said that in the advent of the coronavirus outbreak, which has been declared a global pandemic by the World Health Organisation, the Development Bank has fully endorsed actions taken by the Bermuda National Athletics Association to postpone Carifta Games, and the Ministry of Youth, Sports and Culture in St. Kitts and Nevis to postpone two local athletic meets.

“We are appealing to our athletes to stay focused and remain positive during this trying moment, because once the coronavirus/COVID-19 outbreak is behind us we want them to bring back medals from the 2020 Carifta Games when a new date is announced and the games are held,” she added.

Federation still to determine date for implementation of ‘CARICOM Bubble’ 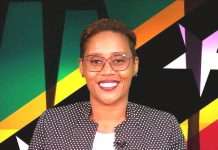