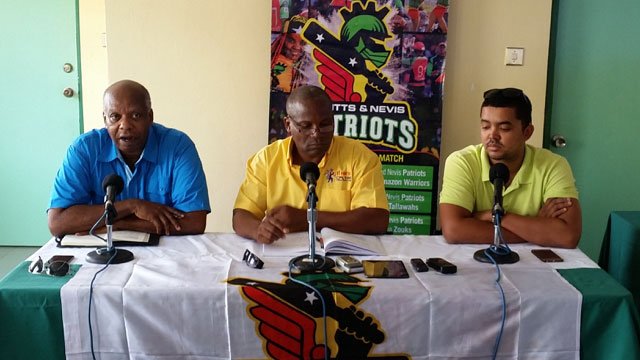 The time is counting down to the 2016 edition of the Caribbean Premier League T20 and the St. Kitts & Nevis Patriots team is ready for action in their home series of games that begin Thursday, 30th June.

Chief Operations Officer of the Patriots Richard Berridge disclosed that some of the players are expected to arrive this week and some, due to international duty, will arrive next week Monday. “Our camp begins on Wednesday. We actually have players beginning to fly in on Wednesday and due to international commitments we have players coming in as late as next week Monday,” COO Berridge said. The players will right away prepare for their matches with two practice games: one in St. Kitts and one on the weekend in Nevis at the E.T. Willet Park.

He reminded patrons that they are not allowed to enter the Warner Park Cricket Stadium with weapons or drugs, including persons with licensed firearms. “Those of you who may have licensed firearms, as you would know, the protocol is that you would check them in at the Basseterre Police Station before coming in at Warner Park,” Henry said. Vendors serving beverages are also reminded not to serve patrons in bottles but in plastic cups.

As part of the excitement and to give cricket fans a chance to meet the players up close and personal, Henry disclosed that there will be an exhibition cricket event in downtown Basseterre this Friday.