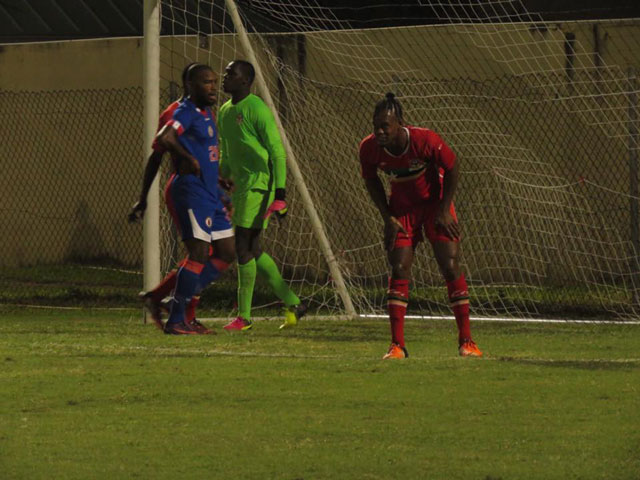 Basseterre, St. Kitts-Team St. Kitts and Nevis were authors of their own demise as they fell 2-0 to Haiti in the Caribbean Cup encounter at Warner Park on Nov. 13 as extra time was needed to separate both sides.

Before the game a boisterous Haitian fan based entered the Warner Park Football Stadium chanting and dancing but the home fans ensured that they would not be outdone and started the same.

The game was a 2017 Caribbean Cup Qualifier. Both teams were already out of contention for that competition but were fighting for a berth in the CONCACAF Gold Cup.

The home side got off to a good start just seconds into the game. The team had a great opportunity to open the scoring and many in the stands thought the ball was in the back of the net after seeing the net ripple but it was played into the side netting.

However, the Haitian team controlled the possession in the game for the majority of the first half but did not really trouble the St. Kitts and Nevis goalkeeper.

The second half continued in the same vein with the Haitians controlling most of the possession but were restricted to mostly long shots of more than 30 yards. However late on in the second half Julani Archibald pulled off two heroic saves to keep the encounter alive for St. Kitts and Nevis.

With just a win needed, St. Kitts and Nevis seemed happy to play a counter attack. They did manage to create a few clear cut opportunities but failed to capitalize on them.

With no separation between the teams during regulation time the game went into extra time and in the first half of extra time the Haitians finally broke the dead lock through a well-placed finished from Donald Guerrier.

Following the goal things went from bad to worse for St. Kitts and Nevis. Just before the start of the second half of extra time two players from St. Kitts and Nevis – goalkeeper Julani Archibald and defender Jason St. Juste — got into a fight and had to be separated by teammates. The incident resulted in St. Juste being sent off and Mr. Archibald yellow carded.

Playing a player down and needing a goal the odds were stacked against St. Kitts and Nevis but they fought valiantly and had a golden opportunity to bring the game back to level terms following an incisive break away. However, Devaughn Elliot’s shot was denied by the legs of the Haitian goalkeeper.

In the 119th minute the Haitians put the game to rest when Duckens Nazon’s deflected shot ricocheted passed Archibald in goal.

Following the game St. Kitts and Nevis’ Head Coach Jacques Passy told reporters for the first 90 minutes the game plan was executed as he had hoped.

“We didn’t Score we didn’t the multiple option we had and after the 90 minutes the red card to Jason St. Juste really hurt us,” he said.

Mr. Passy also debunked the notion that the team was playing a defensive game.

“We tried to attack as much as we could,” he said. “We had eight opportunities in front of goal. That is not being defensive. That isnot finishing the right way.”

The head coach also was questioned about the scuffle between two of his players and said some disciplinary actions may be taken.

“I don’t excuse them but this is something that happens in the heat of the game,” he said. “I am going to talk to both and there is probably going to be some kind of disciplinary action. However, I don’t want to emphasize that because they are actually good friends.”

Team St. Kitts and Nevis’ next assignment will be an international friendly versus Estonia at Warner Park on Nov. 19.