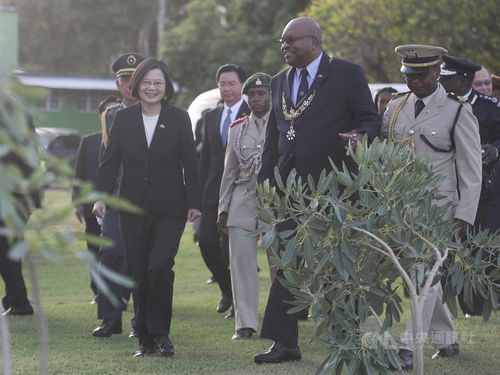 Basseterre- St. Kitts and Nevis conferred a medal of honor on Taiwan President Tsai Ing-wen (蔡英文), who touted the bilateral ties between the two sides as strong and stable.

The Order of St. Christopher and Nevis was bestowed on Tsai in recognition of her contribution to St. Kitts’ development and the advancement of its relations with Taiwan, the Caribbean country’s Governor-General Tapley Seaton said, in conferring the medal on the president.

In her acceptance speech, Tsai said it was the “highest recognition of the long-term friendship and the development of the partnership” between the two allies, which have had diplomatic relations since 1983.

She said the celebration of the bilateral ties was particularly meaningful in view of the fact that when St. Kitts and Nevis became an independent state in 1983, Taiwan was the first country with which it forged diplomatic relations.

At that time, Seaton played an important role in helping to establish diplomatic ties between the two countries, Tsai said, thanking the governor-general for his efforts.

Before the start of the award ceremony, Tsai and Seaton planted a golden trumpet tree in a ceremonial gesture to celebrate the solid diplomatic ties between their two countries.

Earlier in the day, Tsai and her delegation visited Brimstone Hill Fortress National Park, one of the most popular tourism attractions in St. Kitts and Nevis.

The fortress is a UNESCO World Heritage Site and one of the best preserved historical fortifications in the Americas. In 2011, it was ranked by USA Today as one of the top-10 must see hidden gems on the planet.

After touring the national park with representatives from Taiwan’s tourism industry, Tsai said there is huge business potential in tourism exchanges between Taiwan and St. Kitts and Nevis.

Taiwan’s tourism and travel industries would be happy to learn from their counterparts in St. Kitts, a country that is focused on tourism and attracts 1.2 million cruise ship passengers annually, she said. Monday was the final day of the president’s four-day visit to St. Kitts and Nevis.

She is scheduled to visit St. Vincent and the Grenadines on Tuesday and Wednesday, before going on to St. Lucia for three days on the last leg of her 12-day state visit to four Caribbean allies, including Haiti.

On her return, Tsai will stay over in the United States for two nights before flying back to Taiwan on July 2