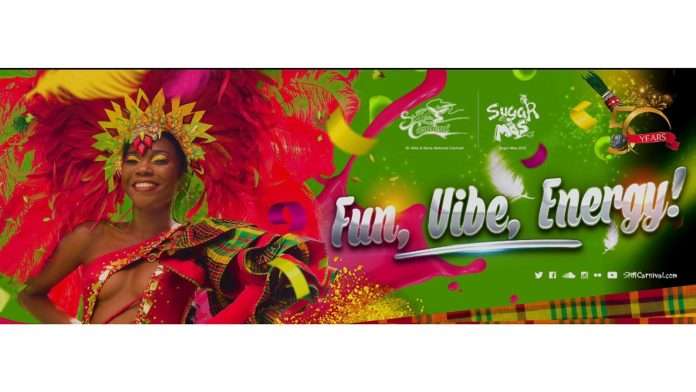 St. Kitts & Nevis’ National Carnival is in full swing, after getting off to a vibrant start with a ceremony that has been lauded locally regionally and internationally, guided by the theme  “Fun, Vibe, Energy: Sugar Mas 50”.

Minister of Carnival and Culture Hon. Jonel Powell in remarks at the opening of Sugar Mas 50 celebrations on December 3rd, boasted that this hosting of the festival is the first of its kind across the region for 2021.

He said, “In another year when covid-19 has maintained its chokehold on mass events around the region; Carnival in Trinidad and Tobago, Crop Over in Barbados, Vincy Mas in St. Vincent, Spice Mas in Grenada, Summer Festival in Antigua, all had to be cancelled for the second year in a row,” he said.

“This is why we should honour the fact that St. Kitts and Nevis is able once again in this present climate to host its National Carnival. For a second year running, Sugar Mas is the saving grace, so to speak, of carnivals in the Caribbean.”

He commended the National Carnival Committee led by Chairperson Shannon Hawley for the work being done, noting that 50 years after being nationalized and after witnessing the downturn economically, socially and physically in 2021 mainly due to the covid 19 pandemic, it was doubtful that the 50th anniversary of Sugar Mas would be a reality.

He said however that “In true Kittitian resilience and ingenuity, we are bringing fun, vibe and energy as we celebrate carnival’s golden jubilee… Permit me to commend Shannon Hawley, Chairperson of St. Kitts and Nevis National  Carnival Committee and her entire team for the planning of the Carnival Program with all the necessary protocols to ensure the safety of the performers, volunteers, service providers and patrons.”

In its 50th year, the federation’s carnival celebrations will be a hybrid of in-person and virtual events and as such the opening ceremony on Friday allowed for a small audience but an appreciative live audience.  The country’s folklore and the history of carnival dating back 50 years were on display as masquerades, bulls and actors graced the stage.

In 2020, Sugar Mas went virtual for the first time, and Sugar Mas 50 will see the return of the live audience. The government has taken the decision to allow fully vaccinated persons at 75% of the capacity of venues to attend these events which is a notable improvement from Sugar Mas 49 which was entirely virtual.

Several shows are making a noticeable comeback this year, including the soca monarch competition, the National Carnival Queen Pageant and the National Carnival Swimwear Competition. The J’ouvert which will take a different format and will be confined to one space as opposed to the usual jamming through the streets of Basseterre is also returning this year on December 27th.

Following the opening, the Soca Monarch eliminations was hosted virtually on Saturday. Moving on to the finals of the Power segment are Mr Hype, Tbone, KO, Dejour, Stadics, Takeover and Infamus, Pino and Blade, Bary-C and Nicha B.

The Groovy finalists who will meet reigning monarch Rucas H.E in the finals are Nicha B, Ny Ny, Jazzbo and Tobap, KO, Blade, Mr. Hype and Dejour.

The next event on the calendar is ‘In the Spirit of Christmas’, which is four nights of concerts to be held at the Antioch Baptist Church from December 6th to 9th.