Ministers of the Team Unity-led Government had the opportunity to witness firsthand the pace of development taking place on several construction projects Tuesday, praising the capabilities and the quality of work being done by several small contractors in the country during the second day of their Industrial and Construction Site Tours, part of the official calendar of events organized in celebration of the Team Unity administration’s fifth year anniversary.

The tour commenced in the village of Tabernacle, where two pavilions are being constructed on the playing field to enhance the sporting experience in the area.

“I would really like to thank the government for giving us the opportunity to prove ourselves and show that we could manage a project as big as this and show the world that we are ready for any stage,” said Mr. Keivon Harris, one of two contractors who successfully won the bid to construct the pavilions.

Mr. Dwight Berry, owner of John Boy Construction, presently undertaking the construction of the new Lodge/Ottley’s Community Center, said he is using this opportunity to make a name for himself as a capable small contractor in the country.

“I’m thankful for the opportunity to tender for this project and as a resident of this constituency and this same village Lodge/Ottley’s, I just want to make my name and show the people that this is what I can do as a contractor,” he said.

Prime Minister Dr. the Honourable Timothy Harris, who led his Cabinet colleagues on the tour of the sites, said his administration is careful in ensuring small contractors are given a fair chance to bid and win government projects.

“It shows that the Government is carefully paying attention to the young people, wanting to help them, wanting to elevate them and wanting to give them a chance to become the best that they can be…and that is why at the project we went to in Tabernacle you have two young men doing the work there on the pavilions. We come here at Lodge Project/Ottley’s and another young man is again doing the work. In other words, this Government is giving young people a chance to excel,” the prime minister said.

The Cabinet delegation also visited the construction site for several houses being constructed under the umbrella of the National Housing Corporation (NHC), as well as the Frigate Bay Strip, where work to revitalize the popular entertainment spot is progressing.

To date, the project at “De Strip” has seen the completion of roads, a round-a-bout, a welcome archway with reception booths, as well as sidewalks that are wheelchair accessible. Delivery and pickup points, an extensive network of underground water, sewage and electrical lines have also been completed. 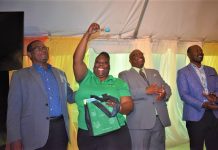