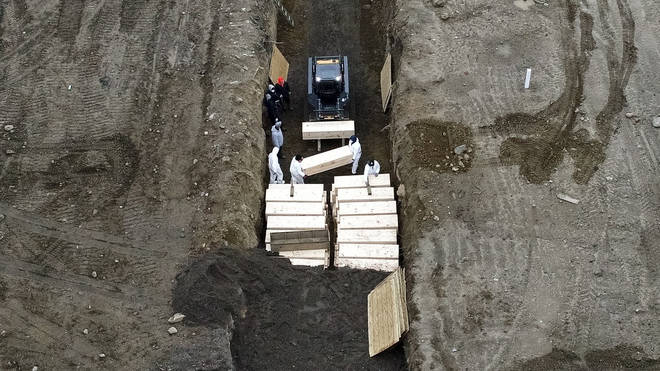 New York State now has more recorded cases of coronavirus than any other country outside the US. And a mass burial site has been reopened on a Bronx island.

The US has by far the most confirmed cases of Covid-19 in the world, with more than 470,000 people infected – three times the number of the next three countries combined.

New York City Mayor Bill de Blasio said earlier this week the city’s public cemetery could be used for burials during the pandemic.

He said: “Obviously the place we have used historically is Hart Island.”

Drone footage showed workers in a huge pit where caskets were stacked on Hart Island, off the Bronx.

It has been used for more than 150 years by city officials as a mass burial site for those who cannot afford funerals.

Burial operations at the site have ramped up amid the pandemic from one day a week to five, the Department of Corrections said.

The number of Covid-19 related deaths in New York State increased to 799 on Wednesday which was a record high for a third day.

Governor Andrew Cuomo pointed out that the number of Covid-19 patients admitted to New York hospitals dropped for a second day to 200.

He took this as a positive sign that social distancing was working.

Also on Thursday official projections for the nationwide death toll were lowered.