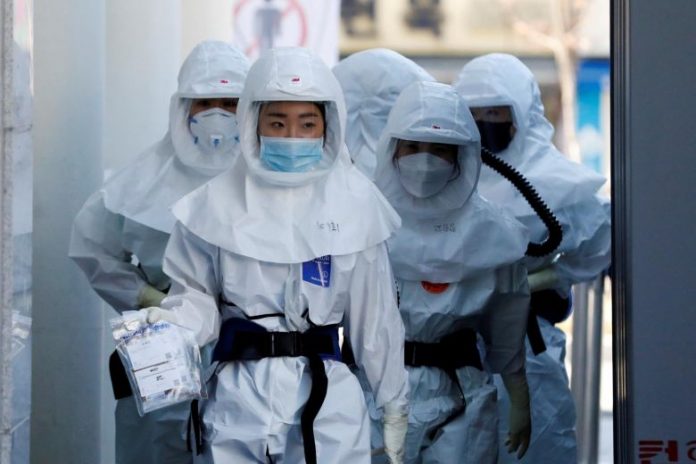 Americans would do well to look to South Korea for an example of how to contain and possibly defeat the fast-spreading coronavirus.

After days of indecision in which President Moon Jae-in and his aides could not believe how quickly the disease was spreading from China, they woke up to the danger and instituted one of the most effective systems anywhere.

In one remarkable innovation, drive-by centers test those with symptoms without asking them to leave their vehicles. A quick temperature check, a rub inside the mouth and maybe the nose with a cotton swab, and it’s all over until the results are known a few hours later.

Dr. Ogan Gurel, who got his medical degree from Columbia in New York and moved to Seoul 10 years ago, cites drive-by testing as one of “a panoply of measures” designed to stop the virus from overwhelming this country of 51 million people.

“There is no silver bullet,” says Gurel, who teaches medicine and provides scientific advice. “Individually, people might suffer, but in aggregate they end up with qualitative stabilization.” That is to say, for the overall population the disease is brought under control.

The proof is in the numbers showing new cases in South Korea decreasing steadily–just 110 on Thursday, the lowest in more than two weeks, while 177 were declared cured and sent home. All told, the number of cases totals 7,979, but the general feeling sense is the worst is over.

“First, public participation must be secured through openness and transparency; second, respect creative thinking and use cutting-edge technology to develop the most effective means of response.”
— Vice Health Minister Kim Ganglip

“Korea is setting a good example for the U.S.,” said Jang Sung-eun, who still rides the subways to work every day while many of her colleagues try to work from home. “They say we Koreans are rather effective in dealing with the problem.”

Such guarded optimism reflects a discernible shift in national mood from the near-panic that engulfed the country after the virus was discovered to be emanating from a church in the city of Daegu, 170 miles southeast of Seoul. The church was one of dozens run by the secretive Shincheonji sect, whose leader, Lee Man-hee, has proclaimed himself the embodiment of Jesus Christ.

“There was some resistance among them to testing,” says Gurel, but by now almost all the sect’s 230,000 members have been checked. Most of those suffering from the disease were members of the church or caught the virus from members who may have passed it on through two or three others, who in turn transmitted it to still more contacts.

Korean self-discipline and community cohesiveness explain much of the success in coming to terms with an illness that remains almost out of control elsewhere.

“The rate of new cases is tapering much more than in Italy, Iran or the U.S.,” says Gurel. “They’ve been taking measures that are quite constructive. They’ve been isolating cluster areas but not in a totalitarian way.

“The proof is in the numbers showing new cases in South Korea decreasing steadily–just 110 on Thursday, the lowest in more than two weeks.”

Quite aside from the availability of quick, no-cost testing, Dr. Gurel cites the discipline of Koreans in heeding advice of all sorts. “There is a constant message about social hygiene,” he says. Avoidance of public spaces, frequent hand-washing, all that “eventually improved the situation.”

“We consider two core values to be important,” he told journalists in Seoul. “First is that public participation must be secured through openness and transparency. Second is to respect creative thinking and use cutting-edge technology to develop the most effective means of response.”

On that basis, he said, “the government is working on various ways to ensure that the information that citizens need to stay safe includes detailed explanations.”

Once a patient is confirmed to have the disease, the words “emergency alert” on mobile phones show his or her “travel history,” said Kim. “The more transparently and quickly accurate information is provided, the more the people will trust the government.”

If that approach seemed like an intrusion on privacy, Kim adopts that same argument in debunking what he called “the traditional response to an outbreak of contagious disease” that involved “locking down afflicted areas and isolating infected victims.”

“Having the large military and needing to remain in constant readiness for an outbreak of war is probably helpful.”
— Korea analyst Steve Tharp

That approach, he said, has had only “modest effectiveness” while appearing “close-minded, coercive, and inflexible.” In fact, he said, “We have experienced harmful consequences with democracy being undermined and active public participation in the process being reduced.”

As a democratic country and a pluralistic society, said Kim, “we must transcend the limitations of the conventional approach to fighting infectious diseases.”

But how can South Korea manage to pull off the trick of sticking to democratic principles while trying to tell people what to do and how to behave? The answer, some believe, lies in Korea’s military history.

“Having the large military and needing to remain in constant readiness for an outbreak of war is probably helpful,” says Steve Tharp, a retired U.S. army officer who’s lived on the peninsula for decades. ”The government was also able to quickly pull assets from the military, such as nurses and others, to assist in the effort. We see pictures of soldiers walking around in hazmat suits spraying different locations.”

Then too, Tharp notes, geography helps. “South Korea is essentially an island with the water on three sides”–and the demilitarized zone between North and South Korea “blocking the hostile nation to the north.”

Finally, he adds in an email, “The small geographical size of Korea and the great rail and road networks also mean that assets/resources needed to fight the virus can be redistributed quickly nationwide–in just a matter of hours.”

While President Donald Trump’s people seemed oblivious to the danger of a pandemic, observes Tom Coyner, a long-time business consultant in Seoul, in South Korea “the national health program is relatively immune to political pressures.” Thus “precautionary measures, such as those pertaining to a possible pandemic, such as SARS, MERS, and now COVID-19, were being treated seriously and unlikely to face budgetary cutbacks. “

Hank Morris, also a consultant in Seoul, agrees. “The Koreans must have developed viral infection testing capacities from the time of SARS and MERS, and also for swine flu, all of which were within the past 20 years,” he says. “They began developing large-scale testing years ago and have allocated some resources to testing capability every year.”

Amazingly, even Korean conservatives, bitterly opposed to the liberal policies of President Moon, cannot deny that Korea’s approach to coronavirus actually appears to be working.

“We’re very advanced,” says Maeng Joo-seok, a regular participant in right-wing protests before the government banned them.  “We are very developed and reliable”–enough to imbue Koreans with confidence in their ability to defeat the odds as they have done so often since the country’s rise from the rubble of war.