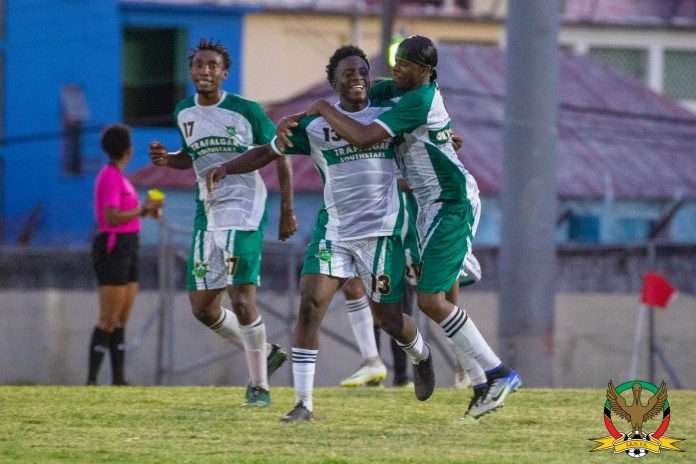 Trafalgar Southstars registered their first win of the season with a dramatic 4-2 victory over TGE Dieppe Bay Eagles on Saturday in the SKNFA Premier League at the Warner Park Football Stadium. Ronaldo Nisbett got Southstars off the mark with a stunning turnaround strike in the 15th minute to send his team into halftime with a slender lead. The second half was a complete turnaround for Dieppe Bay and for a moment it seems they were on course to winning the match. Shawn Dasent equalized for Dieppe Bay in the 48th minute and Georgel Dickenson doubled the lead in the 63rd minute.

Southstars however seemed to have found a new gear after that goal and five minutes later Shomari Hanley found the equalizer for his team. Nisbett found the back of the net again in the 80th minute and Dylon Morton with a brilliant solo effort shrugged off two defenders and slot one past the Dieppe Bay goalkeeper to seal the 4-2 win. This was a welcome result for Southstars after getting their first point of the season with a midweek goalless draw versus Saddlers. The SKNFA Premier League Live commentary team provided analysis of the match. “Good week for Southstars. Getting their first point and now getting their first victory,” said commentator Esington Watts in the Premier League Postgame Show “It was an enjoyable game…normally bottom of the table clash you might find it one sided…it seems more competitive at the bottom of the table than at the top.”

In the second of Saturday night’s double header,

Coach of Conaree Al Richards was pleased for the draw.  “It was a very good game from both teams but all in all I am glad for the draw,” he said.