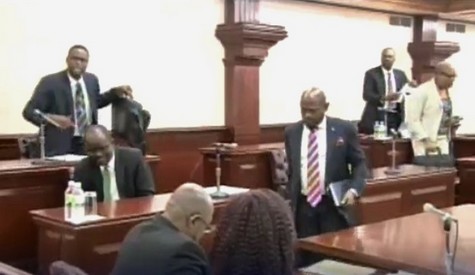 In Friday’s sitting of the Assembly, Speaker of the National Assembly the Hon. Micheal Perkins making a statement identified multiple reasons as to why he was rejecting a MoNC filed by the Opposition in the Speaker on December 13th and amended on December 31st.

Perkins indicated that the amended motion contained many shortfalls including that an amendment that should not differ from what was filed in the original motion as well as citing that a ruling from the Speaker in a previous sitting cannot come under any scrutiny from the Parliament.

The move, however, resulted in a heated exchange between Perkins and Leader of the Opposition Dr. Denzil Douglas who charged among other things that the Speaker had no right to rule on the matter.

The Speaker of the National Assembly then chastised Douglas for his interruption and warned him not to do so again or he would take action.

The Speaker then proceeded to continue to give his rationale for the rejection before he was again interrupted and proceeded to take action to kick the former Prime Minister out of the remainder of the proceedings.

Dr. Douglas however preempted the Speaker indicating that he was leaving the Parliament due to the Speaker’s ‘unfair’ and ‘unjust’ actions. he then called on the other Opposition members to follow his lead and they obliged.