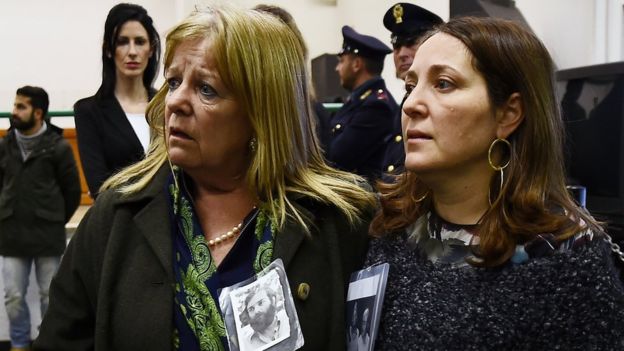 A court in Italy has sentenced 24 South American ex-officials to life in prison for illegally detaining, torturing and killing hundreds of opposition activists in the 1970s and 1980s.

Among the victims – who were killed as part of Operation Condor, a pact between South American military rulers – more than 20 were Italians.

Twenty-three of the 24 defendants were sentenced in absentia. It is doubtful whether their countries of origin will extradite them.

Nevertheless, relatives of the victims welcomed the sentences handed out by the Court of Appeal in Rome as an acknowledgment of the crimes committed under military rule in Latin America.

The relatives had campaigned two decades ago to first bring a case for the 23 victims of Operation Condor who were Italian nationals, taking advantage of a law which allows the murders of Italians abroad to be investigated and tried in Italy.

The two dozen men on trial were senior officials from Bolivia, Chile, Peru and Uruguay and included former military rulers. Among them were:

What was Operation Condor?

Operation Condor was a campaign of state-sponsored terror organised by South American military rulers in the 1970s and 1980s. The US-backed regimes conspired to hunt down, kidnap and kill political opponents across South America and beyond.

It was first devised in 1975 at a meeting of intelligence chiefs from Argentina, Bolivia, Chile, Paraguay and Uruguay. Operation Condor later came to include Brazil, and – in a more peripheral role – Ecuador and Peru.

Victims were kidnapped, tortured, forcibly disappeared and murdered with those targeted often snatched off the streets or taken from their homes.

The most well-known victims of Operation Condor was Orlando Letelier, foreign minister under Chile’s socialist President Salvador Allende, who was assassinated in Washington DC in 1976.

The exact number of those who died is hard to establish. Prosecutors provided evidence showing that at least 100 left-wing activists were killed in Argentina alone. Human rights groups say the total number across all the countries involved is much higher and runs into the thousands.

Operations crossed international borders, with governments helping each other as their security forces chased dissidents, leftists, union and rural leaders, nuns and priests, intellectuals and students.

What will happen next?

Some of the defendants, such as Gen Luis García Meza, died while the trial was under way. Others are already in prison in their home country. Their advanced age means they are unlikely to be extradited to Italy to serve the sentence imposed by the court in Rome.

The only one of the 24 defendants who is in Italy is Jorge Tróccoli, a 69-year-old Uruguayan-Italian navy captain who fled Uruguay in 2007. He was present in court during the case and is now likely to face arrest.

Uruguay’s presidential secretary Miguel Toma, who travelled to Italy for the sentencing, welcomed the court ruling. He told the AFP news agency: “It is an important and emotional sentence for Uruguay and for the victims.”