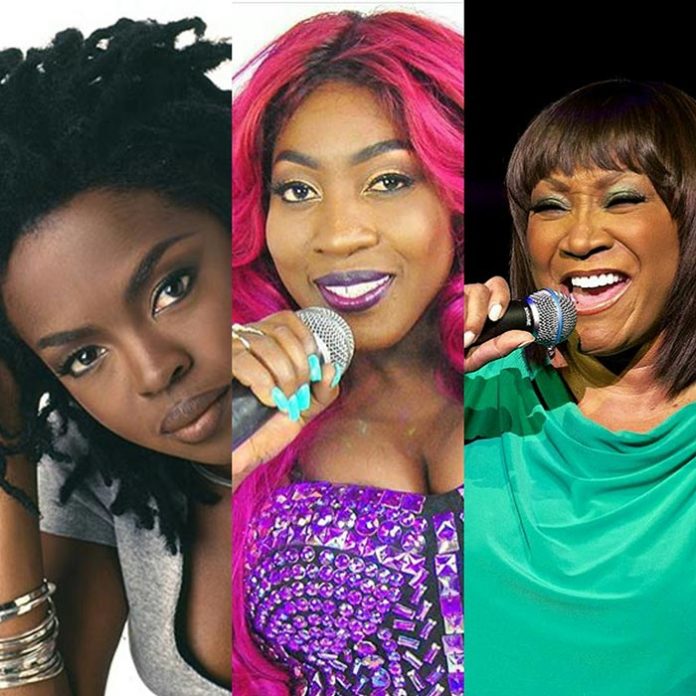 Legendary vocalist Patti LaBelle, American snger Lauryn Hill and Jamaican dancehall artiste Spice have been confirmed to appear next June at the St. Kitts Music Festival in what the event chairman calls “a great day.” for the festval.

The festival may be six months away, but top name acts have to be booked well in advance. The event is set to run from June 27 to July 1, 2018.

Chairman of the Music Festival Committee Damion Hobson indicated that it was a great day for the St. Kitts Music Festival. “After 22 years, we have surprised and shocked our fans and the public generally with the early release of our artist, some six months ahead of the start of the June 2018 celebrations.”

Hobson noted that the reaction to the notice of this announcement that was first shared last week was positive as most fans were happy to see the festival’s committee making these early moves.

“This has been the aim of the committee and earlier this year the minister responsible for the Festival Lindsay Grant challenged the management team to work harder to make earlier announcements. Today as the new Chairman I am happy that my team has made this occasion possible, but all this is reflective of the new approach that we had been harnessing since I was appointed a few months ago.”

He added that after he was appointed they set out to restructure the operations and management of the Festival.

“This new vision we have established it is important for me to state that the St. Kitts Music festival is more than just the three nights of festival. The fringe and promotional activities that we and private organisationsorganise is just as important and helps to create a greater festival with better levels of excitement and satisfaction,” he said.

Minister of Tourism the Hon. Lindsay Grant indicated that the festival was not only an opportunity for the Federation to showcase the local talent, but also to bring a talented festival to St. Kitts.

He reminded that the aim of the Festival that is heading into its 22nd year was to drive the tourism industry during the slower periods. Grant noted that the Committee recognized that they had to change a number of things in order to achieve better results of the festival.

He added that on major change is finishing each night of the festival earlier so that the audience will have time to attend other fringe events and spur economic activity around the Federation.

“In order to achieve that result we can’t have the number of artist that we have been having because that of course extends the time of the festival. I am hopefully that we can keep within that remit and end each night at a reasonable time.”

Grant noted however that he was happy with the selection of artiste that were announced. “I am delighted with the names and I hope that my delight is the delight also of the persons who have heard them at this announcement and I hope they would be very satisfied.”

Head of the artiste selection sub-committee Jonel Powell stated that they were aiming to improve the quality of acts while reducing the quantity. “We have been blessed over the years to have some fantastic artiste coming to St. Kitts to perform and we only intend to build on that.”

He however, noted that when it comes to the selection of artiste there are some factors that must be considered. “This is a Government sponsored event which means the budget is not that big, so we are limited in the reach of acts we are able to get. We cannot afford Rhianna we cannot afford Beyonce that is the reality of the situation.”
Another factor Powell stated was the availably of the artiste. “The availability of acts is something else we are restricted by. Believe it or not we started this process in August and some of the artiste we would have like to get were just not available for June next year but we push on.”

Powell was positive that they will be able to deliver a line-up that will be approved by the public. “We are very confident that the line-up that we are going to produce for you is reminiscent of what the people want and what the tenants of the Music Festival want and is going to be a good representation of what you can expect for the 2018 St. Kitts Music Festival.”