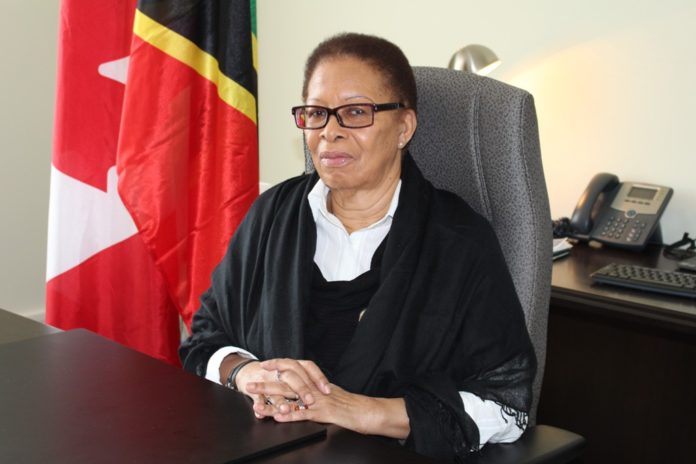 Ottawa, ON – The High Commission for St. Kitts and Nevis in Canada is continuing its efforts to expand networks across key Canadian provinces. High Commissioner Shirley Skerritt-Andrew is this week in southern Alberta on an ambassadorial tour meeting with businesses and provincial government leaders. The high commissioner’s tour is the result of a partnership with Embassy Connections Canada, a non-profit organization that fosters networks between Canadian government and business leaders and foreign representations.

While in southern Alberta, the high commissioner will meet with executives from major firms in the energy, construction and agribusiness sectors. Her Excellency Skerritt-Andrew will also meet with members of Parliament from the federal level as well as members of the Alberta legislature. The high commissioner will acknowledge Canada’s long-standing leadership role in the Caribbean and will call for continued Canadian investment and cooperation in areas of priority in St. Kitts and Nevis, including collaborations in education, cultural exchanges and, in general, people-to-people contact.

In the context of the recent passage of hurricanes Irma and Jose, the high commissioner intends to give an update on the situation in St. Kitts and Nevis and is expected to call for solidarity and increased assistance, particularly for neighbouring islands devastated by the hurricanes.

High Commissioner Skerritt-Andrew sees such acts of public diplomacy as a key part of the High Commission’s work programme as the federation continues to build St. Kitts and Nevis’s profile across Canada all while strengthening the bilateral partnership.

Alberta is Canada’s fourth most populous province and is considered a major international energy player.