Basseterre, St. Kitts – The prime minister of St. Kitts and Nevis, the Honourable Dr. Timothy Harris, has praised the strong existing bonds of friendship that exist between the Caribbean Community (CARICOM) and the Republic of Cuba. Prime Minister Harris made this statement in an official address to the nation as St. Kitts and Nevis joined other member states in observing CARICOM-Cuba Day Dec. 8.

Forty-five years ago, four independent CARICOM states – Barbados, Guyana, Jamaica and Trinidad and Tobago – established diplomatic relations with Cuba. “This single act laid a solid foundation on which the relationship between Cuba and all members of the Caribbean community now stands,” Harris said.

“The bonds of friendship between CARICOM and Cuba are underpinned by pillars of solidarity, commitment and cooperation in socio-economic, political, and environmental spheres,” Harris said. “The relationship is embodied in the provision of scholarship grants and training opportunities, specifically in the areas of health, trade, agriculture, energy, disaster management, tourism development, culture/heritage and sports, ensuring the well-being of our people and society.”

The prime minister noted that the friendship and level of cooperation between CARICOM and Cuba was further strengthened under the leadership of the late Cuban President Fidel Castro, when in 2005 an agreement was ratified to deepen relations in the fields of socio-economic, political cooperation and medical assistance. It was as a result of this that Cuba was afforded the opportunity to be the only nation to establish embassies in all independent countries of the Caribbean community.”

Citizens and residents of St. Kitts and Nevis have benefitted in areas such as health and education as a result of the strong ties that exist between the federation and the Republic of Cuba. “Included among the many areas of assistance are the invaluable services of the Cuban medical practitioners, the Cuba/Caribbean Eye care project as well as Cuban Health care for cancer patients, which have benefitted thousands of our nationals” Harris said. “The Cuban government has generously assisted with the education and training of many of our people. These scholarships have resulted in [more than] 100 students graduating from Cuban institutions in a variety of fields/professions allowing them to embark on careers that positively impact our society.” He added that 40 nationals of St. Kitts and Nevis are currently pursuing studies in Cuba.

Furthermore, Prime Minister Harris pledged the continued support of the government of St. Kitts and Nevis with the Republic of Cuba in supporting the United Nations resolution presented annually at the United Nations General Assembly on the “Necessity of Ending the Economic, Commercial and Financial Embargo Imposed by the United States of America against Cuba.”

“We are mindful of the challenges faced by our Cuban brothers and sisters, as the government and people of St. Kitts and Nevis continue to advocate for the removal of the US Embargo.”

St. Kitts and Nevis officially established diplomatic relations with Cuba in May 1995. 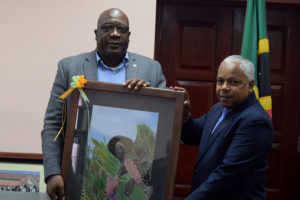