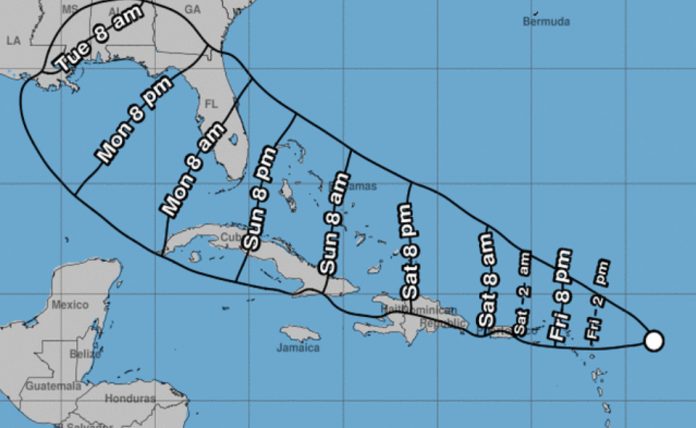 MIAMI – Tropical Storm 13 is nearing the northern Leeward Islands, but a tropical storm watch is still in effect for St. Kitts and Nevis, according to the National Weather Service.

Tropical Storm 13 is about 225 miles/415 km east of the northern Leeward Islands with maximum sustained winds of 35 mph/53 km/h. Its present movement is wnw at 21 mph/3 hmh.

A Tropical Storm Watch means that tropical storm conditions are
possible within the watch area, generally within 48 hours.

A tropical storm watch is in effect for:

Interests elsewhere in the northern Leeward Islands, the Virgin
Islands, Puerto Rico, and the Dominican Republic should monitor
the progress of this system, as additional tropical storm watches
or warnings will likely be required for portions of those areas
later today. Interests in Cuba and the remainder of the Bahamas
should also monitor the progress of this system.

On the forecast track, the depression is expected to move near
or north of the northern Leeward Islands later today, near or north
of the Virgin Islands and Puerto Rico on Saturday, and near or north
of Hispaniola Saturday night.

Maximum sustained winds remain near 35 mph (55 km/h) with higher
gusts. Gradual strengthening is forecast, and the depression is
likely to become a tropical storm by the weekend.

RAINFALL: The depression is expected to produce 3 to 6 inches of
rain over Puerto Rico and the Virgin Islands through Sunday.
Locally heavy rainfall could lead to flash and urban flooding, as
well as an increased potential for mudslides. Some rivers may
overflow their banks.

1 to 3 inches of rain with isolated maximum totals of 5 inches is
expected over the northern Leeward Islands, the Dominican Republic,
Haiti, the Turks and Caicos and southeast Bahamas.