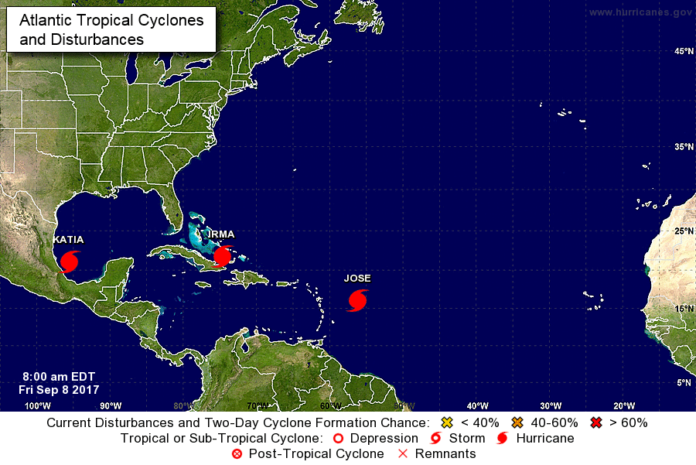 St. Kitts and Nevis residents advised to be vigilant in light of Jose’s approach

BASSETERRE, ST. KITTS – The government of St. Kitts and Nevis advises residents to be vigilant and prepared – to prevent loss of life and minimize damage to property – as a Tropical Storm Watch remains in effect for the federation due to Hurricane Jose, which is expected to be near the northern Leeward Islands Saturday.

A Tropical Storm Watch means that tropical storm conditions are possible within the watch area, generally within 48 hours.

As at 8 a.m. today, Jose was a Category 3 hurricane on the Saffir-Simpson Hurricane Wind Scale, with maximum sustained winds near 125 miles per hour.

Burke also said that “we are likely to see sustained wind speeds of 23 to 34 miles per hour, gusting up to 45 to 50 miles per hour in showers. Seas are expected to deteriorate, peaking at 12 feet or slightly higher. Rainfall estimates are 2 to 4 inches on average, with isolated maximums of 8 inches across the federation.

“Although the federation of St. Kitts and Nevis is not expected to experience hurricane conditions during the passage of Jose, residents should keep monitoring the advisories on the progress of Hurricane Jose until it moves away from the federation and the threat has been discontinued.”

As the prime minister, the Honourable Dr. Timothy Harris, stated on national radio on Wednesday in his initial observations following the passage of Hurricane Irma, the public’s cooperation is essential and greatly appreciated by the St. Kitts-Nevis authorities.

Harris noted then that, “In essence, our people as a whole responded well to all of the advisories and information presented to them for their own safety and security. This high level of responsiveness helped to mitigate what could have been a catastrophe.”