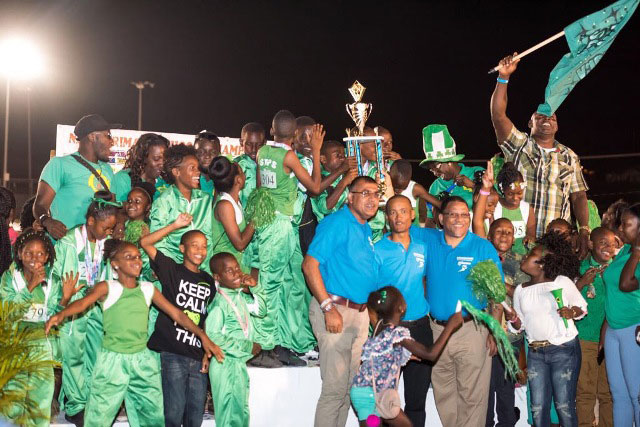 The cracking sounds of fireworks, filled the air and for a moment, the atmosphere at the ET Willet Park, was reflected in the brightly lit sky Wednesday, April 5.

A huge crowd, which originally included such dignitaries as Prime Minister Timothy Harris and Premier Vance Amory, after being initially taken aback by the pleasant surprise, soon warmed to the occasion in spontaneous applause.

It was the much anticipated day of the annual Interprimary schools’ track meet, on Nevis-otherwise known as the MINI-OLYMPICS. The event was held under the distinguished patronage of former Olympic sprint queen Meritzer Williams, who was immaculately attired and made a fashion statement of her own.

The grand announcement as to the 2017 winners of the competition, had just been made. It was revealed that St. Thomas’ Primary school had successfully defended its championship honours, it had secured in 2016.

Their fan base erupted into huge celebrations.

As per usual, hundreds of individuals crammed into the ETW and there were even several boat loads coming over from St. Kitts.

However, the ultimate stars of the day, were the athletes. They came out to excel and to entertain and that is exactly what they did.

The athletes appeared to be well oiled and well-tuned and came out to give it their all.

There were some athletes who stood out more than others and for that very reason, the medals were shared around nicely. The two least populated schools in St. James’ and VOJN, collected gold medals as well and that would have served to stagger some of the points away from some of the more populated schools.

At one point, the St. Thomas’ Primary school was so well challenged by the Ivor Walters Primary, that they were tied on points. However, critically, St. Thomas’ came out a lot better in the 100 meter events and the 4X400 relay events, and that was the ultimate decider.

Immediately after the meet, the medal presentation ceremony was held and the top athletes received their medals. However, it was announced that the individual champion trophies will be presented at the respective schools on Thursday and that the announcement of the Victor and Victrix Ludorum, will be soon revealed.

The revelation of the top schools, was also made: