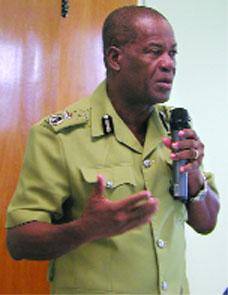 Due to a growing increase in crime and violence around the Federation, the Ministry of National Security and other Non-Governmental Organizations have joined together to form a series of consultations with the aims of solving the issue of crime and security.

The latest consultative session to date was held on Tuesday Nov. 15, at the National Emergency Management Agency Headquarters from 9 a.m. until 12 p.m.

It is hoped that a collaborative approach, involving all stakeholders, will positively impact the initiative of implementing proactive crime prevention strategies.

The ministry believes the stakeholders involvement in the discussion will add more credibility to the national policy on crime and security.

Attendants at the Tuesday forum ranged from members of Parent Teachers Associations to present and former Police Commissioners.

The consultative session was chaired by the Minister of National Security, Justice, Immigration and Labour, Dwyer Astaphan and was accompanied by his Permanent Secretary Astona Browne and Hazel Ross-Robinson.

Astaphan thanked everyone for attending the meeting including the members of the Cayon Radical Sports and Empowerment Club, a club that hopes to build a better and brighter future for youths throughout the communities.

Astaphan applauded the club on their launch last Saturday of which he attended and said that he hoped their efforts and diligence would be duplicated on a national level.

“This gathering is about making a difference for the better, I am asking all of you to play their role in this initiative especially the business sector,” Astaphan said. “We see our role as the government to collaborate all efforts, tell us what you think we can do as a government, what you can do as a people what the country can do on a whole to keep crime at a low.”

A number of persons began to speak following Astaphan’s statements.

Unoma Allen a communication officer within the Ministry of Tourism, spoke first about changing the education system.

“The education system is set to focus on people with the natural ability to do academically well in school, but what about those who don’t have that natural ability?” she asked. “Don’t group children in classes of A6 and A7 but in what they want to do in life, along with the basics give them the skills of being entrepreneurs.”

Former Commissioner of Police Stanley Franks, spoke about self-esteem related issues, suggesting that an institution should be put in place to address the issue, saying that self-esteem plays a major roll as is the foundation of the problem.

While Lennox Warner raised two issues to the forum, he spoke about the church and having good Christian values by saying if people don’t fear God how would they fear the police. And when people spend a lot of money getting the best lawyers to defend them the crime doesn’t look like a crime anymore.

Carol Boddie who represented the Cayon High School PTA said that she was burglarised several weeks ago and was very disappointed in the way the police handled the situation.

She encouraged everyone to start the prevention and cut down on crime by going to the primary schools and supporting the children and schools that are involved in positive efforts such as the Junior Achievement Club.

Former inmate Geraldo Herbert who spent time in prison for some six years said that people need to stop discriminating and stigmatizing ex-convicts who come into the community trying to make a better life for themselves.

“Not all of us have strong hearts when people treat us like criminals still, sometimes we can’t get jobs because of the stigma, and that sometimes cause some of us to be repeated offenders,” he said.

There is so much the teachers and police can do says Wayland Vaughan principal at the Basseterre High School but the parents especially the fathers need to be role models for their children.

Vaughan who was present with two of his male students said that they are without a father figure in their lives.

“School can get you ready, you got to come ready for school, the children have no fathers, the mothers are working two jobs but yet we are expected to bring out, outstanding young men and women in society, never!” he said.

Local businessman Carlton Dupont believes that one of the ways we can tackle crime in the Federation is a better relationship between the police and former police, noting that he was happy to see Former Police Commissioner Calvin Fahie and the present Police Commissioner Robert Jeffers seated together.

He also said that we all need to support the police, “If you see them doing stupid acts, you need to tell them, report a crime when you see it.”

Linnel Nolan, director of Security at Ross University who has more than 20 years experience in the Law and Order system criticized the police for not properly representing themselves to the press. He suggested they should have an official press officer and also that certain high commanding officers are quick to defend officers rather than doing un-bias investigations.

Police Commissioner Jeffers defending the Police said that the police in the SKN force are the most trained Policemen anywhere in the world.

“We are doing everything in our power along with the Ministry of National Security to fight crime, and we do put our police officers in court when they are accused of a crime,” he said. “There have been a lot of good suggestions that have come forward today and we hope we can put them to use.”

The prison have good, positive programs to rehabilitate offenders when they are spending time there, said Superintendent of the Prison Franklin Dorsette.

“There are several trades they learn as well as we teach various subjects and have a Minister of the church come and talk to the inmates. The prison is not necessarily to imprison and punish the inmates but to rehabilitate them for when they go out into society they can be better people,” he said.

In his closing remarks Astaphan thanked all those who attended and said they were disappointed that no member of the other political parties were present.

He also said that if people don’t respect the police then no one will be interested in joining the force.

“Take charge of your community, go into your community centre and teach something, if you see a youngster going astray talk to him and tell him he can do better,” he said. “The men are our biggest culprits in society, it’s sad because I’m a man too, but men need to go into the schools and you can’t just lock down a person and treat them like a dog otherwise they will bite you.”

He ended: “I’m begging you all lets fix this problem before it fix us, help make the police and fire forces look good, because if there is a bad image of them no one will respect them and want to join them.”