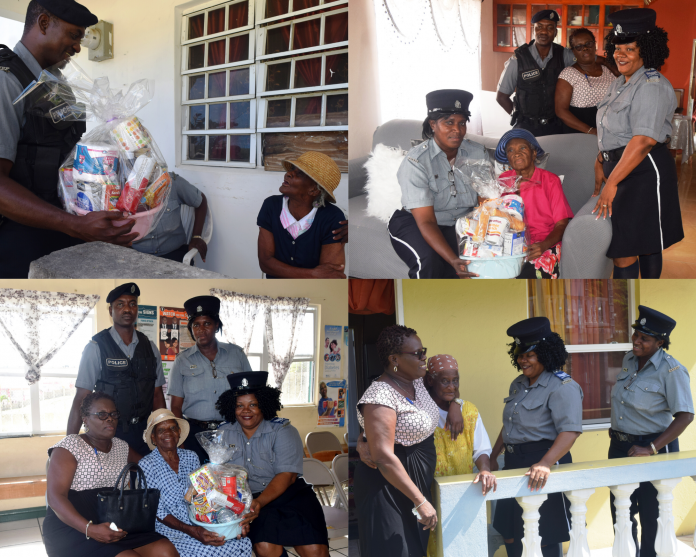 Sergeant with responsibility for the Stapleton Police Station, Charmaine Audain, said that the idea was born out of observations by Police Officers during patrols that some elderly persons in the area lived alone.

“One of our daily duties is to engage the community and in doing engagement in the community we would meet up on elderly persons, so now we are actually committing to the elderlies by giving back to them [and] serving them…,” Sergeant Audain said.

She explained that during their final planning meeting last year, the staff began to brainstorm the types of initiatives that could be implemented in the upcoming year and how they wanted to Police the community.

“One of the initiatives was getting involved with the elderlies. During that [meeting], we started to say we were going to do a food hamper. Everybody [would] bring something out [of] their cupboards. We started to engage that willingly. We got our packages together, however, I was still a bit like I needed to do more. And while on the 9th at the New Year’s Celebration Services for the Police Force, I watched at the theme that the Commissioner had — “Engaging and Reassuring the Communities by Improving our Services” — I was like, you know, that is going to be my first community project for our station and we started collaborating and brainstorming and we decided to do a Stapleton Police Senior Service…,” she said.

“While we’re out on patrol we’re going to monitor their homes, make sure that their homes are secure, at least once a week visit them, talk with them, see how they are doing and if [they need] anything else, probably they might need to go to the health centre in the community or to the doctor, and we will also assist in doing that,” she added.

Sergeant Audain noted they will be working with SKELEC and other government departments to ensure the areas are safe and have proper lighting.

Ms. Saunders, who lives just up the street from the station ,thanked Caines for checking in on her daily and the officers for offering the service to her.

“Thank you all and God Bless You,” said Ms. Jeffers, whom the Officers took to the Health Centre that morning.

Sergeant Audain said the staff and resources at the Stapleton Police Station were limited ,and while they were starting with four food hampers, the hope was to include others in the future. Officers plan to visit all elderly persons in the community they serve.