There are no coastal watches or warnings in effect for Tropical Storm Victor which has formed over the eastern tropical Atlantic.

Victor is moving toward the west-northwest near 13 miles per hour (20 km/h) and this motion is expected to continue during the next couple of days, followed by a turn to the northwest. Maximum sustained winds have increased to near 40 miles per hour (65 km/h) with higher gusts. Steady strengthening is forecast, and Victor is expected to become a hurricane in a day or two.

Tropical-storm-force winds extend outward up to 60 miles (95 km) north of the centre.

Meanwhile, at 5 pm AST, the centre of Hurricane Sam was located over the Atlantic Ocean about 385 miles (620 km) east-northeast of the northern Leeward Islands. 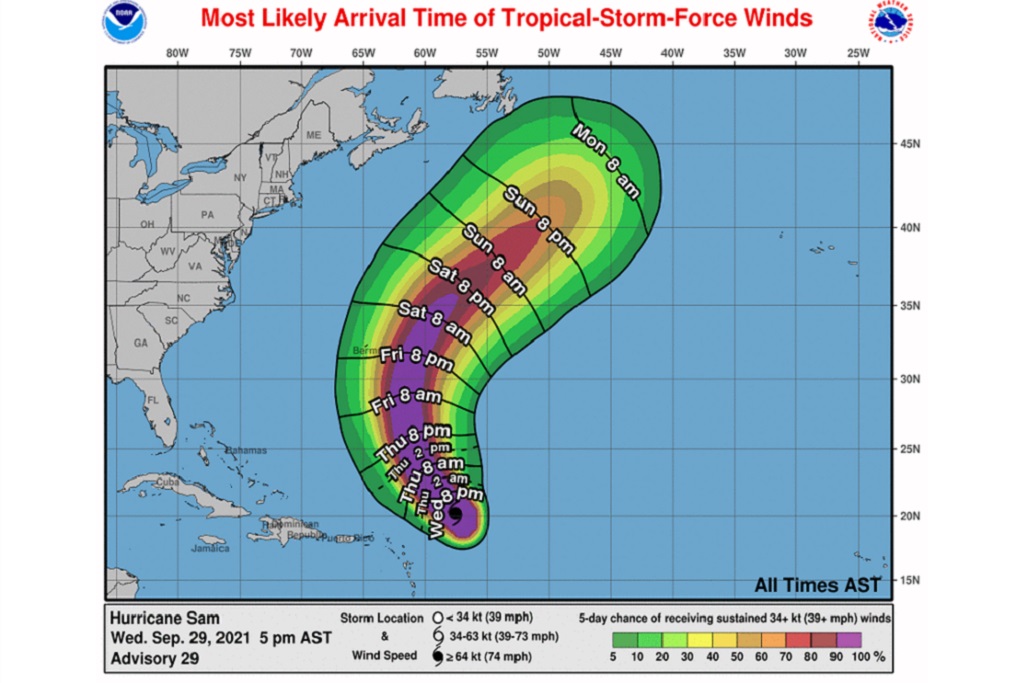 Sam is moving toward the northwest near 9 miles per hour (15 km/h), and this general motion with an increase in forward speed is expected during the next couple of days.

A turn toward the north is forecast by Friday. On the forecast track, Sam will continue to pass well to the east-northeast of the northern Leeward Islands through tonight.

Maximum sustained winds are near 130 miles per hour (215 km/h) with higher gusts – a category 4 hurricane on the Saffir-Simpson Hurricane Wind Scale.

Some fluctuations in intensity are expected during the next couple of days, but Sam is forecast to remain a major hurricane through late this week.

Swells generated by Sam will impact the Lesser Antilles during the next several days. Swells are expected to reach Bermuda and the Bahamas in a day or so, and then spread to the United States east coast by this weekend.

These swells could cause life-threatening surf and rip current conditions.