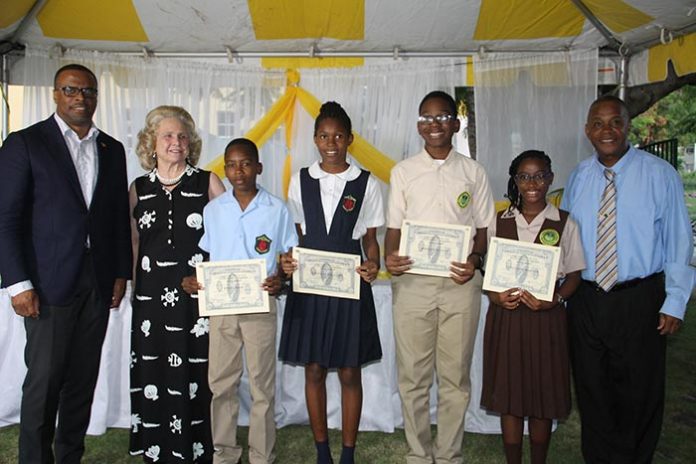 The Nevis Historical and Conservation Society (NHCS ) has once again teamed with the Department of Community Development to host the annual Alexander Hamilton Scholarship Fund Awards aimed at deserving students from both Nevis public High Schools. The ceremony and Tea Party was held Alexander Hamilton Museum Grounds on January 12.

The Fund, established in 1966 by the Trott family, assists deserving secondary school students with uniforms, fees, books and other school supplies. Locally the fund is supported by members of the NHCS and members of the wider community and is administered by the Ministry of Social Development.

Recipients for the 2018 Alexander Hamilton Scholarship were Kegel Isaac and Jonnicia Williams from the Charlestown Secondary School and Kirmani Hanley and Kimalijah Warner from the Gingerland Secondary School.

The Hon. Eric Evelyn, Minister of Community Development, gave brief remarks at the event and encouraged the students to do well in everything that they do

Evelyn reminded the student that by receiving a scholarship in the name of Alexander Hamilton scholarship they should do as much as possible to ensure that you carry that name proud and to do justice to that name.

In concluding he said “I will try my best to follow you work in high school for the next five years. To follow the work you do in the community and I will be looking at you very carefully on the streets to ensure that you conduct yourself well.”

The event was attended by the Premier of Nevis Hon Mark Brantley , members of the Trott family, members of NHCS, Great great great grand daughter in-law of Alexander Hamilton and well wishers.