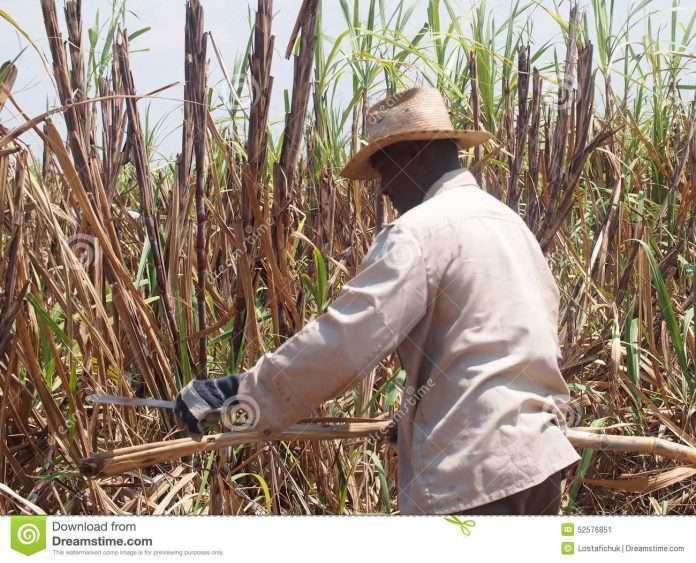 14ymedio, Yankiel Gutiérrez Faife, Camajuaní (Villa Clara), 10 September 2022 — The inhabitants of the Camajuaní valley, in the province of Villa Clara, have known better times for the intensive cultivation of sugar cane.

Today, many of the characteristic towers of the sugar mills that gave prosperity to the settlements of Carmita, Fe, Rosalía, La Julia and Vega Alta are in ruins.

A few continue to barely produce, and the workers don’t receive their salaries for months. This is the case of Rosalía’s macheteros, the cane cutters, who saw their cooperative close fifteen years ago. There, enough cane was cleaned and cut to fill a dozen wagons, and it was then transported for processing to the Fe sugar mill, officially renamed in 1960 as the José María Pérez Sugar Agroindustrial Complex.

Now, in Rosalía, the ruins of the old collection center are piled up, and the government has ripped out the railway line. The locals have been taking everything, from fiber cement tiles to metal beams. There were only the walls left, but the neighbors also chopped up the concrete blocks to take them  away.

The sugar plantations of La Julia, which must now assume all the local production for the harvest, are also in full decline. The cows and horses of the farmers continually enter their fields to feed.

The damage further delays the poor cultivation of the cooperative, which, of the 20 tons that it cut before 2018, will only be able to contribute five this year.

About 320 people work in the La Julia cooperative. Mechanical engineers receive a salary of 5,000 pesos; technicians earn a little less; and workers, who must use their machetes in the heat under deplorable conditions, earn only 2,500 pesos a month, equivalent to about twenty dollars at the official exchange rate.

“The Fe mill buys the cane from us at 700 pesos a ton, but the cooperative must maintain its autonomy,” José Luis, a worker at La Julia who prefers to use a fictitious name, tells 14ymedio. “That means that our salary depends on the income we can get.”

They are rarely paid on time. The sugar cane bureaucracy is indebted to the max to the Central Bank of Cuba, and that delay is directly reflected in the payment of workers.

Margarita, a worker who is transported by cart every day, from Taguayabón to La Julia, explains to this newspaper how the counterpoint of credits and debts works. “The industry has been a disaster for years,” she says.

The credit offered by the bank, she explains, “has an expiration date,” so that, if it’s not paid back on time, there’s no way to pay the macheteros. The possibility of offering land to the workers is being analyzed, but these individuals will face the same problems as the cooperative: shortage of fuel, lack of supplies, machetes, gloves, clothes, shoes, water backpacks.

“If there’s no pay for the workers there, there will be much less for the individual,” she adds.

It’s a vicious circle, José Luis clarifies. The mill also has debts, “which three million pesos must go to,” he calculates, “and without a detailed report of what is going to be done, the bank won’t provide the necessary credit to start the operation.”

Ruined by bureaucracy and malfunctions, no one could imagine today that the Island’s sugar industry was once the first in the world. (File, Archive)

Each step hinders the next, and the most affected is always the humble worker, who has no other remuneration. “On more than one occasion they stopped paying me,” laments Eliecer, a machetero from  La Julia. “They told us that there was no money that month, but the truth is that it happens all the time. That’s why many have asked for leave, but life is very hard and we’re all stuck with whatever we get,” he says.

“Not to mention that workers waste a lot of time trying to get to the cooperative,” adds José Luis. When there’s no fuel to bring them from home, the work day is lost, or the worker himself has to figure out how to get there.

“Last week only 160 liters of fuel were available for transporting the workers,” he says. When they were used up, we had to wait and declare the work as “interrupted.” Nor is there enough fuel for the tractors, the plows or the cultivators. Insecticides and fertilizers are in the same situation.

The man admits that “when things are under private administration, people respect it.” However, “when it’s from the state, no one cares.” That explains why the local farmers bring their animals, day or night, to eat the cane. “Fines have been imposed on them,” he says, “but it’s no use at all. It doesn’t stop anyone.”

In addition to the precariousness with which the macheteros of La Julia live, there are several rumors, which are passed on by word of mouth in the workers’ settlements. Although no one has confirmed it yet, the farmers believe that the mills will no longer produce sugar for export, and will be able to provide barely a portion of the sugar needed for the island.

They believe that, instead, the government intends to sell the molasses to China, at a very high price. In that country, they say, they will use it to manufacture alcoholic beverages and purgative honey, which has a medicinal use, in addition to using it as fertilizer and feed for livestock.

Ruined by bureaucracy and malfunctions, no one could imagine today that the Island’s sugar industry was once the first in the world. This year, the government has reduced the number of mills that grind sugar during the harvest to 23. Small but “efficient,” as Miguel Díaz-Canel described it, this season’s production will not reach even half a million tons of suga