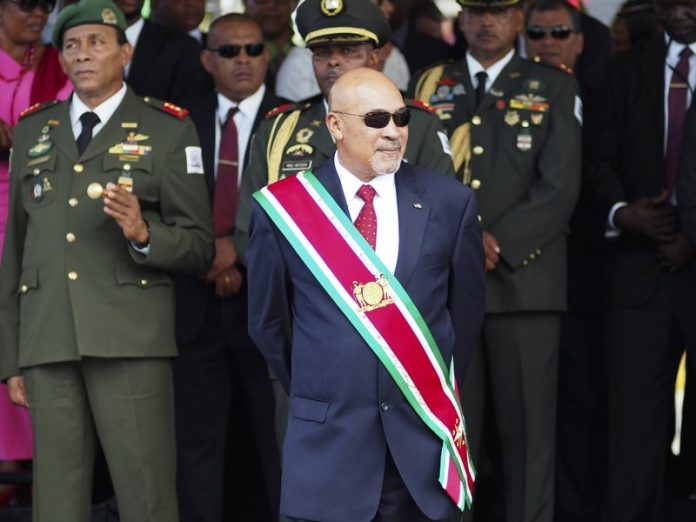 Suriname’s ruling National Democratic Party (NDP) on Thursday called for a recount of votes following preliminary results of the country’s general election. About 90% of the votes have been counted.

“There will be a protest,” said the NDP’s leader, President Desi Bouterse. “We are going to request a recount and ask that all the people can see who won and lost where.”

Bouterse proposed that the recount be broadcast on television.

What happened in the election?

The Progressive Reform Party (VHP), led by former Justice Minister Chandrikapersad “Chan” Santokhi, is set to win 20 seats in Suriname’s 51-seat Parliament. The NDP is likely to secure 16. Santokhi has called on the NDP to concede defeat.

Parliament will select the next president by August. Candidates require a two-thirds majority.

The VHP has started talks with two opposition parties, ruling out an alliance with the NDP.

The elections in Suriname were marred by reports of disorder at polling booths. Vote counting was delayed, leading some opposition parties to declare that the NDP was looking to carry out electoral fraud. The NDP has denied the charge.

Criminal charges against the president

A win in the general election is critical for Bouterse, as it would help him gain presidential immunity and avoid prison. In November 2019, a military court convicted and sentenced Bouterse to 20 years in jail for the execution of 15 political opponents in 1982. The court ruled that Bouterse had overseen what is known as the “December killings,” in which soldiers abducted dissidents, among them prominent journalists, academics and military officers.

All but one of the detainees was killed at a colonial fortress in the capital, Paramaribo. The sole survivor — a union leader — testified against Bouterse. Chan Santokhi had investigated the December killings as the police chief and justice minister.

The court did not issue an arrest warrant for Bouterse last year as under Surinamese law, an arrest can’t be made until all appeals are exhausted. Bouterse has appealed the conviction and the hearing of the case was postponed until June owing to the coronavirus pandemic.

Bouterse has also had run-ins with the law in the Netherlands. In 2009, a Dutch court sentenced Bouterse to 11 years in prison in absentia for drug trafficking. However, his 2010 election victory protected him from being extradited under an Interpol warrant.

If Bouterse isn’t reelected, he could face arrest in countries that have extradition treaties with the Netherlands, as he didn’t serve his 11-year drug trafficking sentence.

Bouterse’s son, Dino, is currently serving a 16-year sentence in the US on drug trafficking charges and trying to help the Lebanese militant group Hezbollah establish a base in Suriname.

A decade in power

Bouterse has been at the helm in Suriname since 2010. He first came to power in Suriname in 1980 following a coup, five years after Suriname gained independence from the Netherlands. He stepped down in 1987 under international pressure in a move that led to a democratic election.

Under Bouterse, Suriname has seen high inflation and rising foreign debt. However, Bouterse was hoping to win a third term, campaigning on his government’s record of increasing social welfare spending and healthcare and infrastructure projects.

The Electoral Observation Mission of the Organisation of American States (OAS/EOM) has recommended that Suriname create an independent electoral body to organise elections in the country.

The OAS/EOM released its preliminary report on Wednesday evening, three days after Surinamese went to the polls to elect representatives to fill 51 seats in the National Assembly.

The Mission noted that Suriname’s Ministry of Home Affairs is responsible for generating the Voters’ List, selecting and training the poll workers, distributing polling cards, and designing and printing the electoral materials and they said this poses a potential for conflicts of interests.

A private meeting between the Chair of the Independent Electoral Council Jennifer van Dijk-Silos and President Dési Bouterse, which resulted in a two hour extension to the polling time, was highlighted by the Mission as an instance of mixing between the political directorate and election organizers.

Another recommendation was changes to the way seats are allocated since “there are significant disparities between different districts.”

The Mission noted a seat for Wanica represents 13,233 voters, while a seat in Coronie represents 1,051.

Despite the issues listed, the Mission commended electoral authorities, including the poll workers, supervisory personnel, officers of the Independent Electoral Council and police officers for their hard work.

The OAS/EOM was led by the Chief of Staff of the OAS General Secretariat Gonzalo Koncke and comprised thirteen experts from eight countries – three of whom provided their support remotely.

The Mission held 44 meetings – both virtual and in-person – with stakeholders to learn about their different perspectives and preparations for the elections.

The observers were present in seven of the country’s 10 districts and visited 96 polling stations in 53 polling centres.