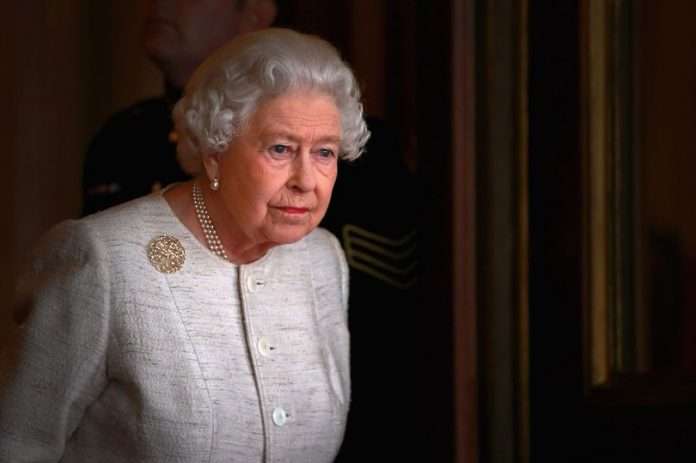 Her Majesty Queen Elizabeth, in her first public statement since the death of her husband Prince Philip,  has sent a message of support to the people of St Vincent and the Grenadines following a series of eruptions of the Caribbean nation’s La Soufriere volcano.

The head of state, who is mourning the loss of her husband the Duke of Edinburgh, said: “I have been saddened by the destruction and major disruption caused by volcanic eruptions in recent days, and my thoughts are with the many people and families who have been evacuated from their homes, and whose livelihoods have been affected.

“I send my thanks to the emergency services and all those involved in the relief effor.

“My prayers will remain with the people of St Vincent and the Grenadines at this very difficult time.”

The enormous eruptions have reeked havoc on the east Caribbean islands.

As many as 20,000 people have been evacuated from the island’s northern region, where the exploding volcano is located, with deserted streets now covered in a thick layer of ash.

The Queen, who is monarch of St Vincent and the Grenadines, made the statement five days after Prince Philip died at Windsor Castle at the age of 99.

St. Vincent Volcano Update As Residents Urged To Leave: ‘It’s Not a Nice Way To Go’

Pyroclastic flows headed down the eastern side of La Soufriѐre volcano in the Caribbean island nation of Saint Vincent and the Grenadines Wednesday as an ongoing eruption continued to generate explosive activity, the country’s National Emergency Management Organisation (NEMO) said.

Pyroclastic flows are scorching hot, ground-hugging flows of ash, debris and gases that typically hit temperatures of 390-1,300 F and speeds of more than 400 mph. These flows are capable of destroying nearly everything in their path.

On Wednesday, Richard Robertson from the University of the West Indies Seismic Research Centre (UWI-SRC) warned anyone in the danger zone surrounding the volcano to evacuate immediately.

“One of the things that we try to do is make sure that people get the warnings so that they don’t get killed,” Robertson said Wednesday during an interview with Saint Vincent and the Grenadines Prime Minister Ralph Gonsalves on local media outlet NBC Radio.

“It really would be unfortunate if people are still there. Because if you get caught in a pyroclastic flow… it’s not a nice way to go. You should get out if you are there.”

An ongoing effusive eruption has been taking place at the volcano since December, 2020, according to a UWI-SRC factsheet. Effusive eruptions are those in which magma, or molten rock, gently oozes out of the ground, producing lava flows and lava domes.

But on April 9, the 3,864-foot-high La Soufrière volcano, located on the island of Saint Vincent—the largest in the chain—began to produce explosive eruptions, spewing out large quantities of ash and hot gas.

On Monday, the volcano began to generate pyroclastic flows that headed down the volcano’s south and southwest flanks.

Between 16,000 and 20,000 people have been evacuated from the area close to the volcano. No deaths have been reported so far, but an unknown number have refused to move, Reuters reported.

“For heaven’s sake leave. Do not risk anymore of your life and limb,” Gonsalves told anyone still in the volcano’s Red Zone on Wednesday.

The current pattern of explosions appears to be episodic—meaning “stop-and-go”—according to the UWI-SRC. But over the past 24 hours, the time between each explosion has increased.

“Explosions and accompanying ashfall, of similar or larger magnitude, are likely to continue to occur over the next few days impacting St. Vincent and neighboring islands such as Barbados, Grenada, Saint Lucia,” the UWI-SRC said in a statement. “The volcano is at alert level Red.”

St. Vincent’s Caribbean Community neighbors were this week preparing to rush food, water and other forms of aid to the country following the massive eruption at the La Soufriere volcano in the north of the island at the weekend.

Police and emergency officials have reported no deaths or injuries to islanders as the eruption sent plumes of ash miles into the sky––up to 39,000 feet––blocking out the sun, closing airports, large parts of the airspace in the Eastern Caribbean and dumping sooty ash in sections of neighboring Barbados 118 miles to the east.

Prime Minister Mia Mottley has set aside three days of national cleaning of Barbados as of Monday, as the island’s airport remains closed at least until Wednesday, and as authorities urge people to remain at home unless being on the roadways is absolutely important. Significant portions of Barbados were also darkened by overhead plumes of ash for much of Saturday and parts of Sunday.

The emergency management agency reported the first main explosion occurring on Friday, April 9, hours after five-term Prime Minister Ralph Gonsalves had ordered a massive evacuation of people living in the dangerous northern sections of St. Vincent. Neighboring states like St. Lucia, Grenada, Antigua and Barbados among others offered and prepared to temporarily take in about 20,000 people who had fled the danger zone. Many also relocated to state shelters or have moved to smaller islands in the Grenadines that is a part of and twin with St. Vincent.

As Gonsalves urged state workers to report for duties on Monday, all member nations of the 15-nation grouping-from Suriname and Guyana on mainland South America to The Bahamas and Belize in the north- were preparing to rush food, water, rebuilding materials and other types of aid to St. Vincent.

And some of the world’s major cruise liners, which do business and make weekly port calls on St. Vincent in non-pandemic times, sent some of their empty vessels to both act as safe temporary havens and to move islanders to other places if and where necessary. Some western nations like Britain also made military vessels available if needed.

This year’s massive eruption was the first since 1979 when ash went skywards. Back then, plumes had also reached Barbados. The most deadly of volcanic eruptions had occurred back in 1902 killing 1,680 people, many of them native Caribs.

Meanwhile, the Trinidad-based Seismic Research Center on Monday reported a large explosion at the site, sending hot pyroclastic flows down the flanks of the volcano.

Leading volcanologist Professor Richard Robertson warned that the behavior of the crater and the volcano in general is more like activities of 1902 rather than the most recent eruption in 1979. Residents should take note and be extremely cautious.

“The activity pattern we have currently is more similar to a 1902 type of eruption of that kind of scale, rather than a 1979 scale. The people who lived through 1979 know the kind of eruption we have had,” Robertson told the main local radio station NBC.

“What does that mean? It means, unfortunately, that it is likely going to cause more damage and destruction to St Vincent. But it also means that there will always be a safe place in the south of the country, which might have a lot of ash every now and then, but you can still sustain life and limb and it would not—which is what we all worry about—get so big that it destroys the whole country. That’s currently doesn’t seem to be the case.”

Monday’s powerful explosion was picked up in Martinique, two islands to the north.

The Government of Grenada will provide $1 million in support for the Government and people of St Vincent and the Grenadines, to help deal with the impact of the explosive eruptions at the La Soufriere volcano.

Grenada initially pledged to accept hundreds of Vincentian evacuees if they opted for relocation and immediately began making arrangements to do so, in collaboration with St George’s University.

However, at an emergency meeting of the Organisation of Eastern Caribbean States (OECS) Authority, this week, Vincentian Prime Minister Dr Ralph Gonsalves advised his colleagues of a general reluctance among Vincentians to relocate to other countries and in some cases, to even evacuate the high-risk areas.

It is against this backdrop that countries have now started looking at alternative means of providing support for the Government and people of St Vincent.

Mitchell said: “This is a time of serious crisis and our hearts go out to our brothers and sisters in St Vincent and the Grenadines. We have not lost sight of the fact that we are in the middle of a global pandemic that has affected all economies but when a crisis of this nature occurs and your brothers and sisters are in trouble, we simply have to extend a helping hand.

It is the right thing to do. In situations like this, I recall September 2004 when Hurricane Ivan devastated our country and these very neighbours, were among the first to help us. Being our brother’s keeper is just part of our tradition as Caribbean people.”

The La Soufriere volcano has experienced several explosive eruptions since last Friday, and with ongoing uncertainty over how long the situation could continue, Vincentians must be prepared for the long haul.

Mitchell said this is even more reason to help because the situation is still unfolding and its true extent may not be known for some time. Also, the fact that community spread of COVID-19 has been confirmed in St Vincent, further compounds the situation.

The Prime Minister said Government’s cash donation will be in addition to all other emergency humanitarian relief that is being coordinated by the National Disaster Management Agency (NaDMA).

The shipment contained primarily water as this has become an urgent need given the contamination of St Vincent’s water supply, but it also included non-perishable food, hygiene products, baby products and adult care items.

The relief effort continues, and a few other shipments have left Grenada for St Vincent, with excellent support coming from individuals, businesses and organisations.

NaDMA, as the coordinating agency, continues to solicit donations of items on the needs list provided by the National Emergency Management Organisation in St Vincent.

Meanwhile, preparations continue to be made to host evacuees in the event that persons decide to take advantage of the opportunity. Evacuees are however reminded that all arrangements are to be made at the Government level and the existing COVID-19 protocols will be strictly enforced.

Digicel donates items worth US$500,000 to St Vincent’s volcano relief

DIGICEL Group yesterday announced the donation of US$500,000 worth of much-needed items to support the urgent relief efforts in St Vincent & the Grenadines caused by the Le Soufriere volcanic eruption.

The telecommunications company, in a release, said it will work with the Government of St Vincent & the Grenadines to identify immediate needs, noting that with thousands of people evacuated from the red zone and housed in shelters and significant ash fall resulting from the explosive eruptions of La Soufriere affecting the entire island, the situation is developing and deteriorating.

The company said, too, that it will assist in procuring and shipping items identified as urgently needed in the early stages by the National Emergency Management Organisation.

The Central Bank of Barbados has closed its offices until April 16 following a volcanic eruption on the nearby island on St Vincent and the Grenadines.
In a statement, the CBB announced “in-person” business operations had been halted due to volcanic ash fall. It said it would continue its remote operations to ensure members of the public can continue to conduct their business electronically.