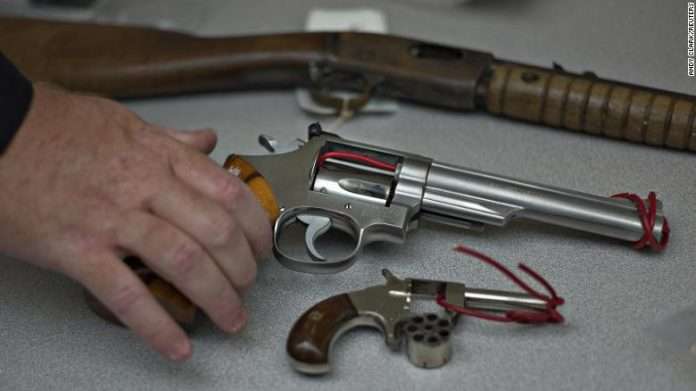 One person was arrested after the police in St Vincent launched an investigation following the discovery of guns and ammunition including six pistols, two high-power rifles, and 200 rounds of ammunition at the Customs Department in Kingstown, on Thursday.

Speaking during a press conference on Friday, Police Commissioner Colin John said the weapons and ammunition were imported into the country and represent the largest single haul of guns and ammunition intercepted by local authorities.

John who said the firearms “seem brand new” could not say how soon the investigation would be completed.

“I cannot say at the moment because we do not know the scope of the investigation. We want to follow our leads and from there we will determine how long the investigation would take,” he said.

“We know one of these bullets could have killed more than one person, based on the velocity of these bullets and these guns. So I am really happy that we were able to intercept these firearms.”

He said the seizure was a collaborative effort between the Royal St. Vincent and the Grenadines Police Force (RSVGPF) and the Customs Department.

According to John regional and international bodies will be contacted to assist in the probe as the weapons were imported into the country.

John, a former deputy director of public prosecutions, also thanked the members of the Customs Department for their vigilance, cooperation and assistance in law enforcement in helping to reduce crime in the country.

“We have seen in the last couple of months and the last few days, I would say, the apparent use of firearms to commit some very serious offences. We have to, as best as possible, try to reduce the number of firearms in St. Vincent and the Grenadines and arrest perpetrators. So this, indeed, is a good effort on behalf of the RSVGPF.”

The police chief was speaking during a week in which two persons were shot and killed and another two shot and injured, taking the homicide count to 39, one shy of the record.

The police commissioner also urged the public to continue to assist the police in their crime-fighting efforts.