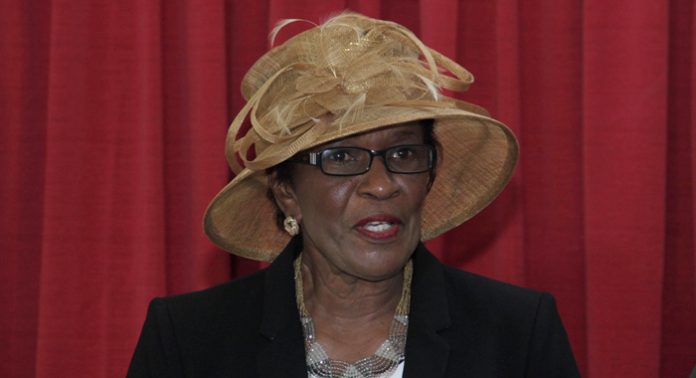 KINGSTOWN, St. Vincent, CMC – The first female Governor-General of St. Vincent and the Grenadines, Susan Dougan was sworn in today – Emancipation Day, promising to execute her duties with professionalism and integrity.

“I am grateful for the opportunity granted me, through this elevation, to make a meaningful and lasting contribution to the development of our nation, using the knowledge, skills and experiences I have garnered over 30 years as a public servant,” Susan Dougan told a ceremony at Government House.

“I will strive to carry out my duties with professional, integrity, valuing the constructive opinions of others and, in so doing, make the right decisions in service to Vincentians in all walks of life.

“Today is Emancipation Day and a time when we should all reflect on our past with the hope that it engenders in us the enthusiasm to go forward and build a brighter future,” she said.

Dougan was administered the oaths of Office and Allegiance by High Court judge, Justice Brian Cottle during a ceremony witnessed by state officials, as wells as relatives and friends, and the media.

“I am extremely honoured and privileged to fill the post of Governor-General and that Her Majesty has consented for me to do so,” said Dougan, a retired educator, who has also served as Cabinet Secretary.

As Governor-General, Dougan represents Queen Elizabeth 11, who is also sovereign of the country.

In her 30 years as a public servant, Dougan, who has a degree in chemistry, was also principal of the Girls High School and also served as chief education officer.

It was under her tenure as chief education officer that the Ralph Gonsalves government executed its “education revolution”, which saw every primary school leaver being guaranteed a place in secondary school.

Dougan thanked Gonsalves for giving her the honour of becoming the first female governor-general of St. Vincent and the Grenadines.

“I look forward to working with the government, all members of Parliament and our national institutions in service to the people of St. Vincent and the Grenadines,” she said.

She commended former governor-general Sir Ballantyne Frederick “for your outstanding service to this nation not only as the head of state but as a renowned cardiologist.

“You have, indeed, carried out your duties with distinction and have left a record worthy of emulation,” she told Sir Frederick, who retired from thepost on July 31st, after 16 days.

In announcing the changing of the guards earlier this month, Gonsalves said that Sir Frederick had indicated that he wanted to demit office because of health reasons.

The governor-general noted that St Vincent and the Grenadines will on October 27 celebrate 40 years of independence and has made significant gains over those years, especially in education.

“I have no doubt that we shall continue on the path of sustainable development despite the many challenges facing small island developing states.

“We have already shown that we are a resilience people with an uncanny knack for achieving the near impossible. The record stands to show,” she said.