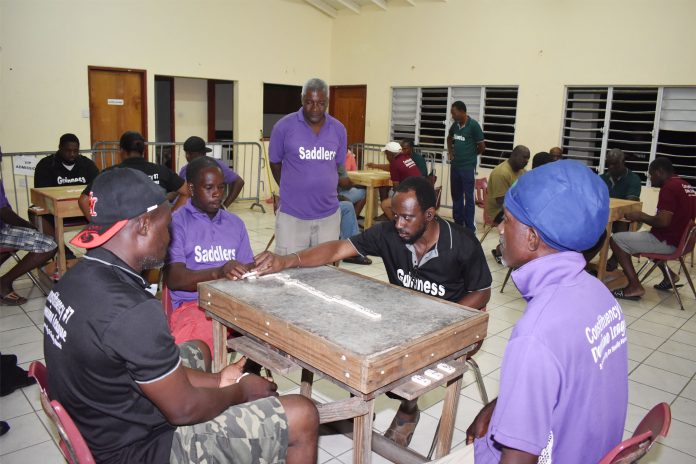 Guinness Domino Club dramatically slowed Saddlers Domino Club’s race to catch up with defending champions Parsons Domino Club Thursday evening as the end of the second round of the round-robin stage of the 24th edition of the annual Constituency Number Seven Dr. the Hon. Timothy Harris Domino League draws near.

In an entertaining eighth segment game played at the Lodge Community Centre in Lodge Project, Guinness Domino Club came out fighting from the word go and were shortly leading Saddlers Domino Club 3-0. The players from Constituency Number Six fought back but the best they could do was to earn a single point after a 13-10 beating.

Revenge was sweet for Guinness, who in the first round had been soundly beaten 13-4 by Saddlers in an away game played at Shanty Bar in Saddlers Village.

Playing at home in Back Way Bar in Parsons Village, defending champions Parsons managed to withstand an unexpected onslaught to edge Christchurch Domino Club 13-11. In the first round the champions took a 13-10 win over the same team.

Ninth and final segment of play in the second round of the home-and-away stage of the league will be on Tuesday, Oct. 22 at five venues.

Defending champions Parsons will be at home to Guinness at Back Way Bar in Parsons Ground; Giants will meet Molineux at the Lodge Community Centre in Lodge Project; Saddlers will be at home facing Sylvers at Shanty Bar in Saddlers Village; Christchurch will be facing Unity Patriots at Domino House in Mansion Village; while Unstoppable will attempt to stop Small Corner Bar at the Edgar Gilbert Sporting Complex pavilion in Molineux.