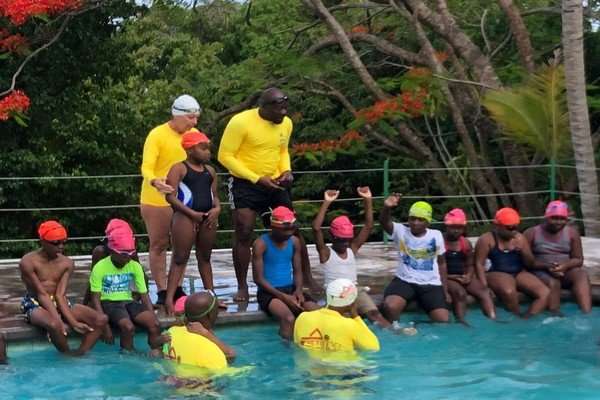 ‘Swim to Win’, a program organised to teach Nevisians how to swim and be safe in the ocean, is pushing for swimming to be part of the school curriculum, following the successful hosting of the Inaugural Christena Memorial Swim Camp

Speaking with the Observer, Coach Anne McLindon said the goal of ‘Swim to Win’ is to get people safely into the water.

“Last year was the 50th anniversary of the sinking of the Christena, and in honour and memory of those whom we lost, we started the program.”

Last August, Premier Mark Brantley announced the establishment of the camps, as part of activities marking the 50th anniversary of the sinking of the MS Christena Ferry.

McLindon said the programme is being offered to all ages and all abilities. She said when they launched ‘Swim to Win’ in January 2020, they trained some instructors.

“We have a very specific way that we teach swimming, but everything starts with safety. We want all of our swimmers to be safe in the water; whether they are at the beach or on a boat, they need to learn survival skills.”

She said they teach freestyle, backstroke, breaststroke and butterfly, and students are from the age of six. But they are developing the program for younger swimmers.

“We are trying to reach as much of the community as possible, and by the end of this week, we would have worked with over 300 swimmers.

“In the mornings this week, we have done our very first Christena Memorial swim camp, and that is done with Cecily Browne Integrated (CBI) School. These children have learned so much this week; they are incredible. They are learning how to float and swim and be safe, comfortable and confident in the water, and becoming a success.”

McLindon said after a delay in the start of the camp, she worked with 40 swimmers to assist them in learning and developing confidence in the water.

“The achievement is just indescribable. We had a very successful week, and this week we are building on that in the morning with the CBI, and in the afternoon with 15 paid instructors.”

She said all the instructors started as volunteers, then were provided with training, and they then become paid.

“They do go through some rigorous training, and we develop them as instructors and swimmers themselves.”

McLindon said the ultimate aim would be to get a swim program as part of the school curriculum.

She said they had to convince some people who were scared to come and learn to swim.

“We meet you wherever you are, take it step by step, and we go as slow as our swimmers need us to go. A lot of it is building trust between the swimmer and the instructor. I am not going to make you do anything you don’t want to do…we build the trust… I will be safe and will teach you how to be safe. There is no rush for us. We are here for them and to get them into the water comfortably.”

The swim coach said that the length of the program goes from beginner to competitive.

“There is no end to the program. We start with people who don’t want to get in, and we work with you and continue to develop your personal skill. Our program goes up to competitive swimmers, and our hope and goal are to enter our swimmers into swim meets.

“This is a program that is comprehensive – from brand new scared swimmers to developing high level international competitive swimmers.”

McLindon said they will give out awards to swimmers, and will have medals for everyone who came through the swim camp.