Team-Unity Government is seeking legal advice to determine whether Dr. Denzil Douglas should reimburse monies paid to him while he sat in Parliament, according to Prime Minister of St. Kitts and Nevis, Dr. the Honourable Timothy Harris. He said the payments were in clear violation of Section 28 of the St. Kitts and Nevis Constitution and was later condemned by the Eastern Caribbean Supreme Court.

Prime Minister Harris made this statement while appearing on the virtual forum series “Leadership Matters” on July 7.

The Eastern Caribbean Supreme Court (ECSC) of Appeal in Castries, Saint Lucia, on March 12, 2020, ruled that Dr. Denzil Douglas, Leader of the St. Kitts and Nevis Opposition Labour Party and Parliamentary Representative for St. Christopher Six, must vacate his seat in the National Assembly with immediate effect.

In the appeal case between the Attorney General of St. Kitts and Nevis and Dr. Denzil Douglas, the learned judges concluded that “…Dr. Douglas, by his application for, receipt and use of a Dominican diplomatic passport, placed him in clear breach of section 28(1)(a) of the Constitution. As a matter of law, the consequence in the terms of section 33(3)(c) follows. That consequence is that, Dr. Douglas is required to vacate his seat in the National Assembly in Saint Christopher and Nevis.”

“It is hereby declared that Dr. Douglas, by reason of his becoming a person who, by virtue of his own act, is under an acknowledgment of allegiance, obedience or adherence to the Commonwealth of Dominica in breach of section 28(1)(a) of the Constitution, is required, pursuant to section 31(3)(c) of the Constitution, to vacate his seat in the National Assembly,” the judgment stated.

“For that period of time in which he acted in the Parliament while in fact he was an imposter,” said Prime Minister Harris. “That matter was discussed a the Cabinet this week and the Cabinet determined that we shall have legal advice on that subject matter to determine what further action needs to be taken, if any, to remedy that particular behaviour.

“This means hundreds of thousands of dollars were paid to Denzil Douglas when he was not properly a member of the parliament and we shall seek advice on that,” the Prime Minister said. 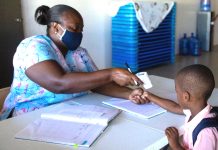 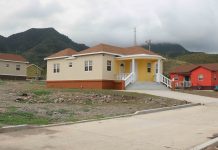