BASSETERRE, St. Kitts – Citizens and residents of St. Kitts and Nevis learned Wednesday, March 21, of what the current government calls “dirty political tactics reportedly orchestrated by the now Opposition St. Kitts and Nevis Labour Party during the lead up to the 2010 and 2015 general elections.”

News broke Wednesday via the international media that Cambridge Analytica, an affiliate of Strategic Communication Laboratories Group (SCL), was allegedly employed by the Labour Party to target People’s Action Movement leader Lindsay Grant ahead of the 2010 election in St. Kitts and Nevis, aiming to undermine his candidacy against the Labour Party.

Senior Minister the Honourable Vance Amory said he was not surprised by the “low-level political actions” allegedly employed by the former Dr. Denzil Douglas administration.

Speaking at the Team Unity Town Hall Meeting at the St. Paul’s Community Centre, Minister Amory, who was then leader of the Concerned Citizens Movement (CCM), said “what we saw up to 2015 in this country was what I called when I wrote to the Commonwealth Office [and] wrote to governments in the Caribbean advising them that we are seeing a creeping dictatorship in St. Kitts and Nevis. I wrote it…because it was of great concern that we had a Labour Party government at that time doing everything and anything to retain itself in government.”

Prime Minister the Honourable Dr. Timothy Harris revealed that he, too, was a victim of the “devious” tactics allegedly orchestrated by the Labour Party, whereby hackers accessed his personal information, including his emails.

An excerpt from a Guardian Newspaper article, dated Wednesday, 21 March, 2018, states, “In a second episode in early 2015, sources said the same Israeli team that had worked on the Nigeria campaign obtained private information of the St Kitts and Nevis Politician Timothy Harris. At the time he was an opposition leader, and is now prime minister.”

In response, Harris told the large gathering at Wednesday’s town hall meeting that this represents a clear breach of his privacy. “I am happy that God is good because…despite going to those extremes, despite all the money he had and he boasts about, despite all the music he brought, despite the 4,000 people he put on PEP and forced to go to every public meeting, Douglas is gone,” he said.

Cambridge Analytica is currently embroiled in a recent Facebook data scandal concerning the access it reportedly gained to private information of more than 50 million Facebook users. 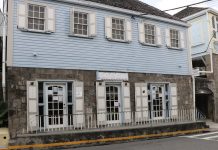