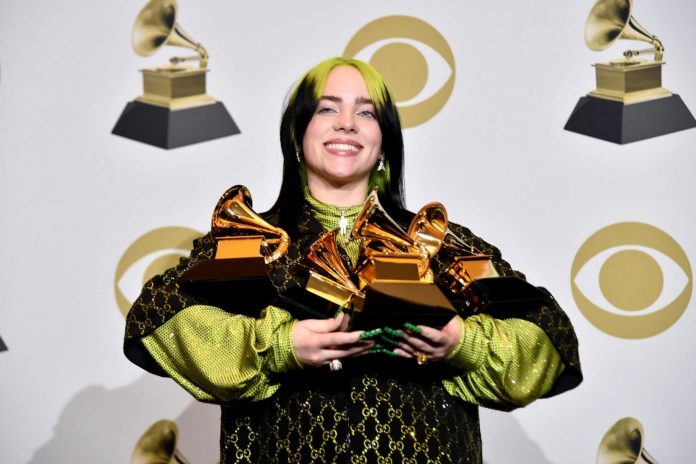 With a Bad Guy, this girl sure did good! At this Sunday’s 62nd Annual Grammy Awards, Billie Eilish triumphed in all four of the major categories – Best New Artist, Record of the Year, Album of the Year and Song of the Year. Having only turned 18 in December, this makes her the youngest-ever musician to achieve such a feat and the first woman to pick up all four in the same year.

Hit single Bad Guy won both Record and Song of the Year, while her debut album, When We All Fall Asleep, Where Do We Go?, which she recorded in her childhood bedroom with brother Finneas O’Connell, won Album of the Year.

For his work on the album, Finneas also picked up Producer of the Year, as well as the award for Best Engineered Album (Non-Classical). On winning, he said, “It’s a huge honour to be given a Grammy for making home-made cookies.”

Eilish’s first big win of the night was for Song Of The Year. Looking genuinely surprised, she said, “I never thought this would happen in my whole life. I feel like I jump around at these things and I never take anything seriously, but I genuinely want to say that I’m so grateful and I’m honoured to be here.”

As the night went on, Eilish was visibly overwhelmed by her success, at one point being seen to mouth “Please don’t be me” in the audience and shouting to the sky as she scooped another trophy.

While accepting the award for Album Of The Year, a shocked Eilish called out to the crowd and said, “Can I just say Ariana Grande deserves this?” Looking on from the audience, the ever-gracious Grande waved off the comment and blew kisses.

It’s not surprising that, by this point in the evening, Eilish had become a little lost for words and out of people to thank. Stepping in, Finneas added, “We didn’t make this album to win a Grammy. We didn’t think it would win anything, ever. We wrote an album about depression and suicidal thoughts and being the bad guy, whatever that means. We stand here confused and grateful.”

As well as becoming the youngest-ever winner of these four categories, Eilish also became the first woman and second person ever to win all four in the same year. Oh, and if you thought four trophies were a lot to handle, she also picked up another for Best Pop Vocal Album too.