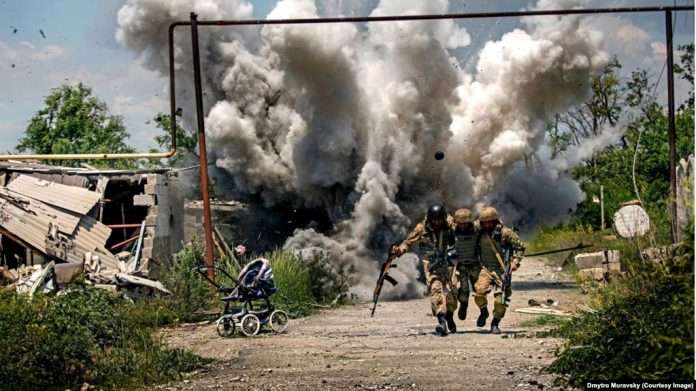 President Volodymyr Zelensky, with his spirit of resistance, his heroism and his uncompromising fidelity to democratic values, has the admiration of all.

And Europe, like the United States, has the political and moral obligation to stand, more than ever, at his side.

The undersigned are outraged by the violence committed to the civilian population by the occupying Russian forces.

Bomb shelters are transformed into school classrooms, hospitals are destroyed and children are born in fortified subway stations.

And, faced with this, the Ukrainian army, reinforced by tens of thousands of civilians, are taking up arms, standing firm and defending their cities.

But let us be clear.

They are not only defending their country.

These hardened military brigades, these teachers, restauranteurs, labourers, dancers, these women and men from all walks of life, rising up, also defend our liberty.

They fight for an open and free world.

They fight, on the front line, for us, Europeans.

And, for this reason also, we should act, without delay, directly, to end this war.

We, the undersigned, commend the sanctions taken against Russia by the European Union, the United States of America, Canada, Japan and others.

But much more is needed and this is why we urge our governments to go further and adopt the following measures.

These sanctions, if they are resolutely put in place, can end this war.

If this is not the case, at least they will force the Kremlin to deescalate.

They are practical measures that, from outside Ukraine and for Ukraine, free citizens can demand democratically from their leaders.

In addition, each of our personal actions will help.

Support in any way Russian civil society and Russian citizens protesting against the war.

Putin’s war of aggression against free Ukraine is not just a military affair.

It is a battle between two concepts of society, two visions of what makes life good or bad and, at bottom, two forms of civilisation.

Our future is at stake and the fate of all those in the world who believe in democracy, still hope for freedom and wish for peace.