BASSETERRE, St. Kitts — Terminal Boyz Domino Club sent out a clear message that they were all out to take the crown during fourth segment of play in the second round of the St. Kitts National Domino Association tournament on March 2, held at the New Town Community Centre.

Galvanised by the outstanding show put up by the father and son pair of Selwyn ‘Bungo’ Anjo and Vincent ‘Five Cent’ Bowry, who played opposite each other, Terminal Boyz dismissed Spartans Fig Tree Domino Club 26-12 with ease, to assert their top position in points standing.

Latecomers Domino Club cast aside the meaning of their name and proved it is only a name by banging Newcomers II Domino Club 26-18. For Latecomers, Robert Tyson and Norris ‘Chuck’ Sharry won three games and lost one, Robert Tyson and Kally won three games without loss, while for Newcomers II, Keithly Blanchette and Laba won four games and lost three.

The competition, which is sponsored by the Development Bank of St. Kitts and Nevis – Platinum Sponsor, First Federal Credit Union, Best For Less Trading Ltd, The Craft House, and NAGICO Insurances, continues on Thursday March 4 at the New Town Community Centre starting at 6:00 pm with the teams meeting for the fifth segment of play in the second round of the competition. 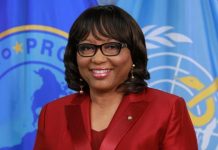