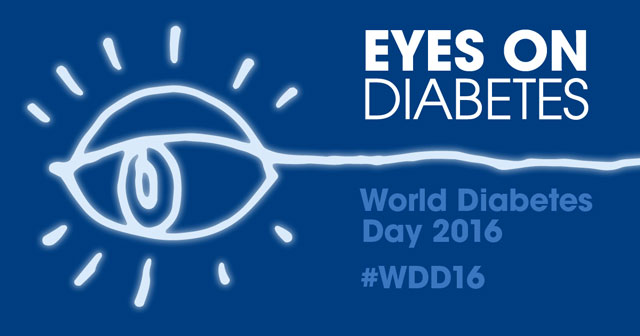 Basseterre, St. Kitts, November 14, 2016 (SKNIS)—The United Nations (UN) chosen theme for the 2016 international observance of World Diabetes Day on November 14 stresses the debilitating effects that diabetes, a non-communicable disease (NCD), can have on a diabetic’s eyes.

“In its 2016 diabetes awareness campaign, the International Diabetes Federation (IDF) has reminded the global community that diabetes can affect one’s vision, cause eye disease, and in some cases, lead to blindness. It is for this reason why early detection and treatment of diabetes are keys to preventing vision loss and negative impact on diabetics’ careers and socio-economic status,” said Minister of State within the Ministry of Health, Senator Wendy Phipps, in her official address in observance of Diabetes Awareness Week 2016, and World Diabetes Day on November 14.

“The IDF also notes that one in every two individuals with diabetes is unaware that they are diabetic. For this reason, it is imperative for everyone to have regular medical check-ups in order to know their status relative to Type 2 diabetes. It should also be noted that in 2015 some 415 million persons were living with diabetes. At this pace, it is also predicted that by the year 2040 this number can rise to 642 million, with much of the growth being concentrated in low to middle income countries. The cost of diabetic care on the global economies cannot be overlooked either: the IDF estimates that 12% of the global healthcare expenditure is being spent on adults suffering from diabetes (equivalent to US$673 billion in 2015). These statistics re-affirm the staggering impact of diabetes on our global populations – to epidemic proportions.

“I wish to re-emphasize the fact – as I did in last year’s address on World Diabetes Day – that the disease is a life-altering condition that should not be taken lightly. With a healthy diet, exercise, medication, a positive outlook, and particular attention to matters such as foot care, diabetes can be well-managed and the quality and duration of life can be maximized for the persons living with the disease. Let us all join the St. Kitts Diabetes Association in observance of both Diabetes Awareness Week and World Diabetes Day 2016,” Minister Phipps added.